Memorial Day 2015 - ALL gave some and some gave ALL 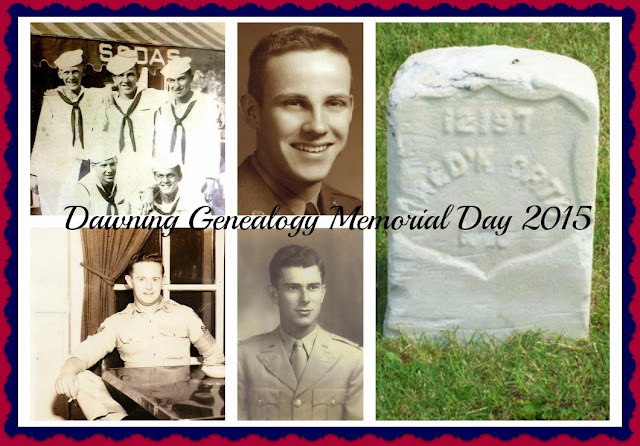 
Today we remember the men and women who are currently serving in all branches of our military. Today we also remember those who have fallen from The American Revolutionary War to the War with Iraq and Afghanistan. All of them fought for our FREEDOM. They fought with bravery, courage, honor and valor.  Some of them made the ultimate sacrifice by giving up their life.

As I have worked on my children's paternal lines and my own I have found that many of the men in these families served in our military from the American Revolution to World War II to the Korean War. As of today, I have not found any ancestors who served in the Vietnam War or any subsequent war after Vietnam.

My Dad served in the Korean War. My Mom's great grandfather Friedrich Orth was wounded at the Battle of Missionary Ridge, TN and died from those wounds in 1863. My Dad's stepfather Glenn Hammond served in WW II. My Uncle, Bill Hoback served in WW II.

My daughter in law, Cassie, her 6th paternal great grandmother, Laodicea "Daring Dicey" Langston Springfield is a heroine of the American Revolution as well as her husband, Thomas H. Springfield.

All gave some and some gave ALL.