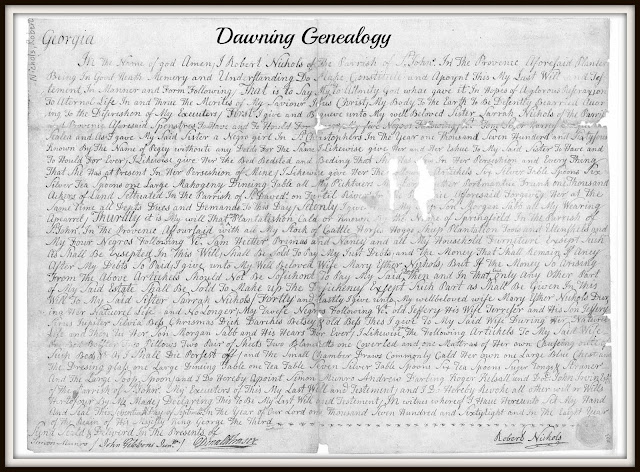 In February of this year, my friend and fellow blogger, Cathy Meder-Dempsey, who writes the blog, Opening Doors in Brick Walls wrote a series of posts for Black History Month about her 5th great-grandfather, James Sims (1754-1845). You can read her story of James Sims, here (Post 1 for James Sims, Post 2 for James Sims, Post 3 for James Sims). Here in these posts, Cathy released the names of 9 known slaves formerly held by James Sims. Cathy's articles gave my fellow blogger, Schalene Dagutis of Tangled Roots and Trees, the idea to create The Slave Name Roll Project. This is my second post for The Slave Name Roll Project.


This is the second of the Colonial wills I found at the Georgia Virtual Vault and is for Robert Nichols, second husband of my children's 6th great grandmother, Mary Esther Maxwell Sabb Nichols. Robert and Mary had no children and in his will he makes bequeaths to his wife, his sister Sarah and his stepson, Morgan Sabb. Robert's will was written on September 17th, 1768 and recorded on December 20th, 1768 in St John Parish, (present day Liberty County) Georgia.

Robert's first bequest is to his sister, Sarah, a spinstress (spinster), his five Negroes Tom, S_______, Harry, L______, Sealer (?), unfortunately the ink is smeared and there is a piece missing in this section of the will and I cannot make out all of the names. Robert also makes the point of addressing the fact that he gave to Sarah a Negro girl in St. Christophers in the year 1764 known by the name of Peggy. It would appear that Robert gave Peggy to Sarah without any deeds or bill of sale and he makes a point of settling the matter in his will.

Sarah is also to receive her bed and its accessories that she was already using along with six silver tablespoons and six silver teaspoons. Along with these items she also receives all of his pitchers, a mahogany dining table and a trunk belonging to M__ __ther (perhaps a trunk that belonged to their mother or grandmother?) Portmanteau. She is also left one thousand acres situated in the Parish of St. Davids on Turtle River.

In his second bequest he gives all of his wearable clothing to his stepson, Morgan Sabb. I can only imagine that perhaps Robert and Morgan were approximately the same size. Perhaps Robert felt the need to leave his stepson something but yet did not want to leave him anything with too great a value knowing that he was his mother's only heir.

In his third bequest Robert makes the request of his wife, Mary Esther Nichols, that his plantation called (or known by) Springfield in St. Johns Parish along with his entire stock of cattle, horses, hoggs and sheep, plantation tools, utensils and household furniture ("except such as shall be excepted in this will"), along with of his four Negroes, Sam, Huster, Princess and Nancy, are to be sold to pay his just debts. However, in the event that selling these items does not cover the cost of his debts then and only then should any other part of his estate shall be sold to make up the difference with the exception of what he left to his sister, Sarah Nichols.

In his final request, Robert bequeaths to his wife Mary Esther Nichols during her natural life and no longer his twelve Negroes following viz. Old Jeffrey, his wife [Theresa] and his son Jeffrey, Sirus, Jupiter, Silvia, Bess, Christmas, Dick and [Duchess], Betsy and Old Bess. Once Mary is deceased these twelve men and women were to be inherited by Mary's son, Morgan Sabb.

Robert's sister Sarah married John Stewart in 1769. They had one daughter, Elizabeth. In John Stewart's will, the land that was left to Sarah by her brother was passed on to her daughter Elizabeth.

I have not yet found the will of Mary Esther Nichols but I have found that of her son Morgan Sabb. In Morgan's will there is mention of a slave named Jupiter but I can't not say with any certainty that he is the same Jupiter found in the will of Robert Nichols. I can only suspect that he is perhaps a descendant of the Jupiter named in Robert's will.

It is now my turn to release the names of the known slaves as listed in the will of Robert Nichols. I release Tom, Harry, Sealer, Peggy, Sam, Huster, Princess, and Nancy. I also release Old Jeffrey, his wife Theresa and their son Jeffrey, Sirus, Jupiter, Silvia, Bess, Christmas, Dick and Duchess, Betsy and Old Bess. There are two names that I am unable to read clearly but I release them as well. I release these names in the hope that one day it will release their souls and that they will be reunited with each other and their families.

Over the years, I have been helped by many other genealogists and I have always tried to pay it forward as often as I can. I hope in some small way that I am helping someone else to find their family.