This past week I had the opportunity to attend a workshop at the South Carolina Department of Archives and History (SCDAH). The workshop, "Sources for Researching Your Civil War Ancestors"1 was presented by Mr. Wade Dorsey, an archivist at SCDAH.

You may recognize the name, Alexander Salley, he is a well known author in the genealogical community. One of his jobs was to provide proof of Confederate Service to surviving veterans and their widows for pension applications. This was free to the soldiers and their widows.

Today, that service is still provided for free. If you provide the name, unit, regiment and company of your ancestor SCDAH will search their records and provide an abstract of your Civil War ancestor on official letterhead. Included with that is the information to purchase copies of the records they used to write their abstract.

It should be noted that SCDAH does have subscriptions to Ancestry.com and Fold3.com.

The next record set for Union soldiers would be the veterans and widows pension records. The US Troops were paid by the US Government. You can find the pension record index at Ancestry. You can also find both the index cards and pension applications for these records at Fold3.

Using the information provided in the workshop I found the following pension record for
Patsy Brooks2. Patsy's husband, Allen Brooks served in the 35th Regiment of the US Colored Troops. Her application packet has more than 200 pages! Her pension application is below. 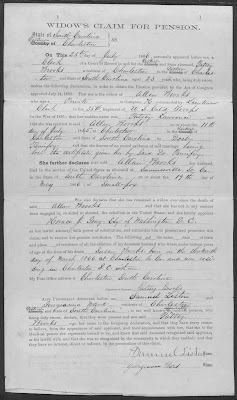 Another record set you may find Union soldiers on is the 1890 Census. Yes, I know the 1890 Census was destroyed in a fire but there is a surviving list available for Union Veterans who were living SC at the time of the 1890 Veterans Schedule. The SCDAH has these records on microfilm and a printed index. You can also find these records at Ancestry.

There is one last set of records that you may find Union soldiers in and those are the 1910 and 1930 census records. I have to admit I didn't know this! I knew about the 1840 Census which tracked veterans of the Revolutionary War. I can't help but wonder if veterans from WW 1, WW 2, Korea, Vietnam, Iraq and Afghanistan have been included in more recent census records. Known of my Confederate veterans survived to be in these census records so I don't know if their records are marked or not.

In the 1910 Census, you will find the question for veterans of the Civil War in box 30 and if the answer was yes it was denoted with a check mark and the initials UA. Here is the
19103 census for my children's 2nd cousin, four times removed, Calvin C. Kitts showing the designation. I wish it was larger but I have the entries for Calvin.

The Department of Archives and History maintains many various record series that can help you identify your ancestor who served in the Civil War from the state South Carolina. Many of them can be found at Fold3, however there are some that can only be found at SCDAH.

The most important records you will find at SCDAH are the "Compiled Service Records" of South Carolina soldiers who served in the Civil War. These records are available for South Carolina units and include a index that is Confederacy wide. These records are arranged by branch of service. In order for SCDAH to assist you in your search you will need to know which branch of service your ancestor served in (Artillery, Cavalry or Infantry). There is a printed index of South Carolina troops in the Reference Room at SCDAH.

These compiled service records can include the following information: muster rolls which were taken every two months, promotions/demotions, branch of service, rank, unit, date/place of enlistment, who enlisted them and for how long. You may also find surrender and parole information, captures, prisoner of war information, what POW camp they were taken to, desertions, wounds, hospital rolls and death information. These are the primary records used to prove that your ancestor served in the Civil War.

The SCDAH also has "Compiled Service Records of General and Staff Officers and Nonregimental Enlisted Men" on microfilm from the National Archives. This series is done alphabetically and does not have an index. These compiled service records are for General Officers like General Wade Hampton and also includes Surgeons, Ordnance Officers and Quartermasters among others. These men usually did not fit into the typical regimental structure. These records are also available on Fold3.

Also on microfilm are records that pertain to the Navy and Marine Corps personnel. Like the Army you will find service cards, hospital and prison records and are arranged alphabetically.

This is a series of five oversized folio volumes which are arranged in the following order: branch of service, unit and company. In this record series you may find information on soldiers who do not have a compiled service record. The fifth volume in this series is about servicemen from the militia, state troops and other miscellaneous units. This volume is not indexed. However the men who don't have compiled service records in this volume have been added to the Confederate Abstract database at SCDAH and can be checked by the Archives staff.

"The Roll of Honor and The Roll of the Dead" are another series that was created by the Confederate Historian office. It is a compilation of South Carolina deceased servicemen who were either killed and/or died while serving the Civil War. Both rolls were started during the war and were completed in the 1870's. While they contain the names of the dead they are not complete. In these rolls you may find the following information: name, age, rank, company, regiment, home district, date and place of death and cause of death.

A more complete listing of South Carolinians who died in the Civil War is the book, "Broken Fortunes" by Randolph Kirkland. Another good resource is a multi-volume series by Herbert "Bing" Chambers is "And Were the Glory of Their Times". The Archives has both of these available in the Reference Room. It should be noted that they currently only have volume one of Mr. Chambers series.

In 1887, South Carolina enacted a law to provide Confederate pensions to veterans and their widows. The first payments were made in 1888. There are very few pension applications that exist prior to 1919 however a list is available at the Archives. In 1919, the state required all veterans and widows receiving benefits to fill out new applications. You can find these applications at SCDAH by county with the exception of Williamsburg County. You can also access these records via the SCDAH's Online Records Index.

Also in 1888, South Carolina began making a yearly list of pensioners. These lists are done by county and classification. These lists were then published each year in a report by the Comptroller General to the South Carolina General Assembly.The pension lists generally contain the veteran's name, county, unit and the date he entered the pension roll. Also check the county in which your veteran lived as he maybe listed on a county level in the "Board of Honor".

While South Carolina did not have any units that were composed of black soldiers there were black men who served as cooks, musicians, servants or attendants. It is rare to find them in Compiled Service Records because they are generally listed by their first name, usually with the designation of "colored" and their owners name are usually listed. Below is an example that was used in the workshop which I was able to find on Fold35. This is the muster roll for Lotte, a colored cook in Capt. Walter's Company (Washington Artillery), South Carolina Light Artillery.

I should also note that beginning in 1923, black men who served as cooks, musicians, servants or attendants could apply for a Confederate pension.The surviving applications can be found at the Online Records Index. You can also find a list in "South Carolina's African American Pensioners" by Alexia Helsley.

Other Records Available at SCDAH

The next few record sets are new to me and you can bet I will be exploring them very soon! In 1909, The "Infirmary for Confederate Veterans (Confederate Home)" opened in Columbia, South Carolina. In the beginning only two veterans per county could be sent to the home. Later on the home began accepting widows, daughters and nieces of Confederate veterans. SCDAH has the infirmary applications for the home available. Below is an example of an application for the Confederate home. Below is the application for J. T. Calmeas6 which I found in the Online Record Index for SCDAH. 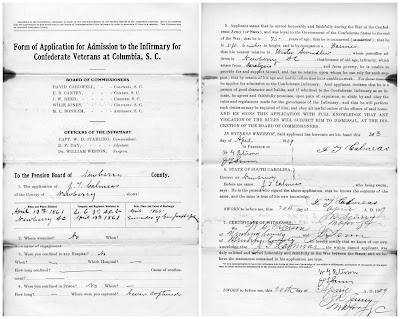 Another interesting record set found at SCDAH is "Records of Artificial Limbs". Records were kept from 1866. However there is an exception, during the Reconstruction period the convening authorities declined to supply Confederate veterans with artificial limbs. It was the General Assembly who would occasionally authorize payments for Confederate veterans who had lost arms and legs in the War.

I purchased a small book, "Artificial Limbs for Confederate soldiers" by Patrick J. McCawley which gives a history of articial limbs and includes an index to "Artificial Limbs and Voucher Applications". I also picked up two other books by Mr. McCawley, "Guide to Civil War Records: A guide to the records in the South Carolina Department of Archives and History" and "South Carolina Department of Archives and History - Selected Civil War bibliography".

Do you have ancestor who was the right age to have served in the Civil War but you can't find any records to document his service? Have you heard of Conscription laws? Well these particular laws exempted many persons from service including slave owners who had a certain number of slaves as well as those who were overseers on plantations.

The SCDAH has a list of exempted Overseers in South Carolina from 1862-1864. These records show the name of the overseer, the district in which he lived and the name of his employer. South Carolina also had state conscription laws that exempted, teachers, doctors, ministers and railroad employees. Some of these petitions for exemption still exist and can be found in the records of Adjutant General for the years 1865-1865. Others appear in the papers of Governor Andrew Gordon McGrath however they are filed chronologically with his correspondence.