It has been awhile since I have written about my Monday's with my grandson Easton. It's hard to write about him when he isn't feeling well and all he wants to do is cuddle, which is so okay with me! Back in the fall he began having chronic ear infections and I just couldn't do anything to help him but I did try because I have been down this road before with my own children. In January he had tubes put in his little ears to help with those mean old nasty ear infections and is back to his normal self for the most part.

During this time we watched the Ice Age series of movies, Walt Disney's Frozen and more recently Shrek the Third. We spent many of our days cuddling up and watching movies. I also spent a few Monday's rocking him for his entire nap because his ears hurt and his little head was too congested for him to sleep. Trust me those were my favorite days!

My daughter in law, Cassie had a conference here in Columbia where we live for two days just before Christmas so she and Easton came and stayed with us. We had so much fun! Movies, bubbles, playing outside and being completely silly! We fixed his favorite dinners and he got to spend time with Jaja too. Easton finally got to play in the big chair too! 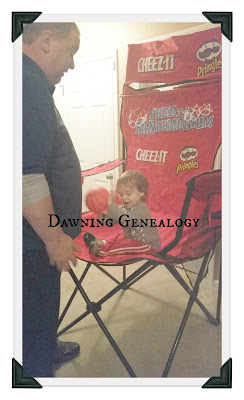 The photo to the left is from my personal collection of photographs. We bought this huge chair at a silent auction a few months before Easton was born. My husband, Tommy has been dying to use this chair at our Parrot Head functions but I wouldn't let him until Easton could sit in first. It has two basketball goals attached at the top and it came with the basketballs too. My thought was that when Easton came to visit us, he and Tommy would have something special to look forward too. Easton loved it!

Yesterday morning bright and early we took a picture of the two of us for Genealogy Selfie Day. Neither of us are very good at taking selfies but we did it! We also watched movies while he played in his "new" BMW battery operated car that his other maternal grandparents gave him as an early birthday present. We also played with his ball pit or should I say his idea was to throw out most of the balls so he could lay down amongst them, then I would pickup the other side and so that he was covered up with them. Afterwards he thrust himself into my arms and said "Again, Dede!". We also played outside as it was a wonderful 70 degrees! 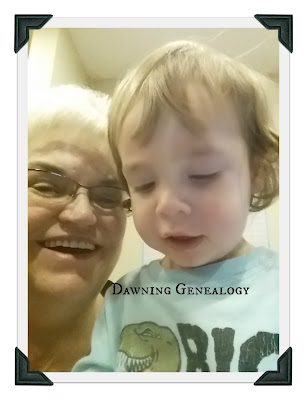 And here is one of our Genealogy Selfie pictures! [personal collection]

Email ThisBlogThis!Share to TwitterShare to FacebookShare to Pinterest
Labels: February 2016, Monday's with Easton