The Death of Our Son Part 3

Editor's Note: I want to take a moment and thank all of my Facebook friends and my family for your kind words and your support this week. It means more than you will ever know. This is part three of Kenny's story.

Last year I wrote a series of posts about the death of my son, Kenny. I received many comments from other Mom's who have lost children too. Kenny has been gone for 16 years now and in honor of this anniversary I will be reposting all 4 posts. It is my hope that my story of loss and grief can bring another mother or father just a little bit of peace and comfort, even if it is only for a little while.

The viewing was held on Friday, February 11th, 2000 from 6:00 PM to 8:00PM. We were expecting family, friends and co-workers of our blended families. What we received that night was an outpouring of love for Kenny as well as for our families. The funeral home did not rush us or anyone away as the eight o'clock deadline rolled around and the line was now out the door for those who came to say goodbye. Fr. David led us in Rosary for Kenny as well.

What we never expected were all the teenagers that knew Kenny from Greensboro and the surrounding area as well as Rock Hill who would also come to pay their respects. They were grieving Kenny's loss too. They formed a line and quietly waited their turn to say good-bye. With our permission they left cards, letters and stuffed animals in his casket. I myself put the quilt that I made for him while I was pregnant in the casket along with his very first teddy bear that his Dad bought him. We asked the funeral home to please leave everything that was put into casket as it was. Our feelings were that these were private messages for Kenny and that it would stay that way. 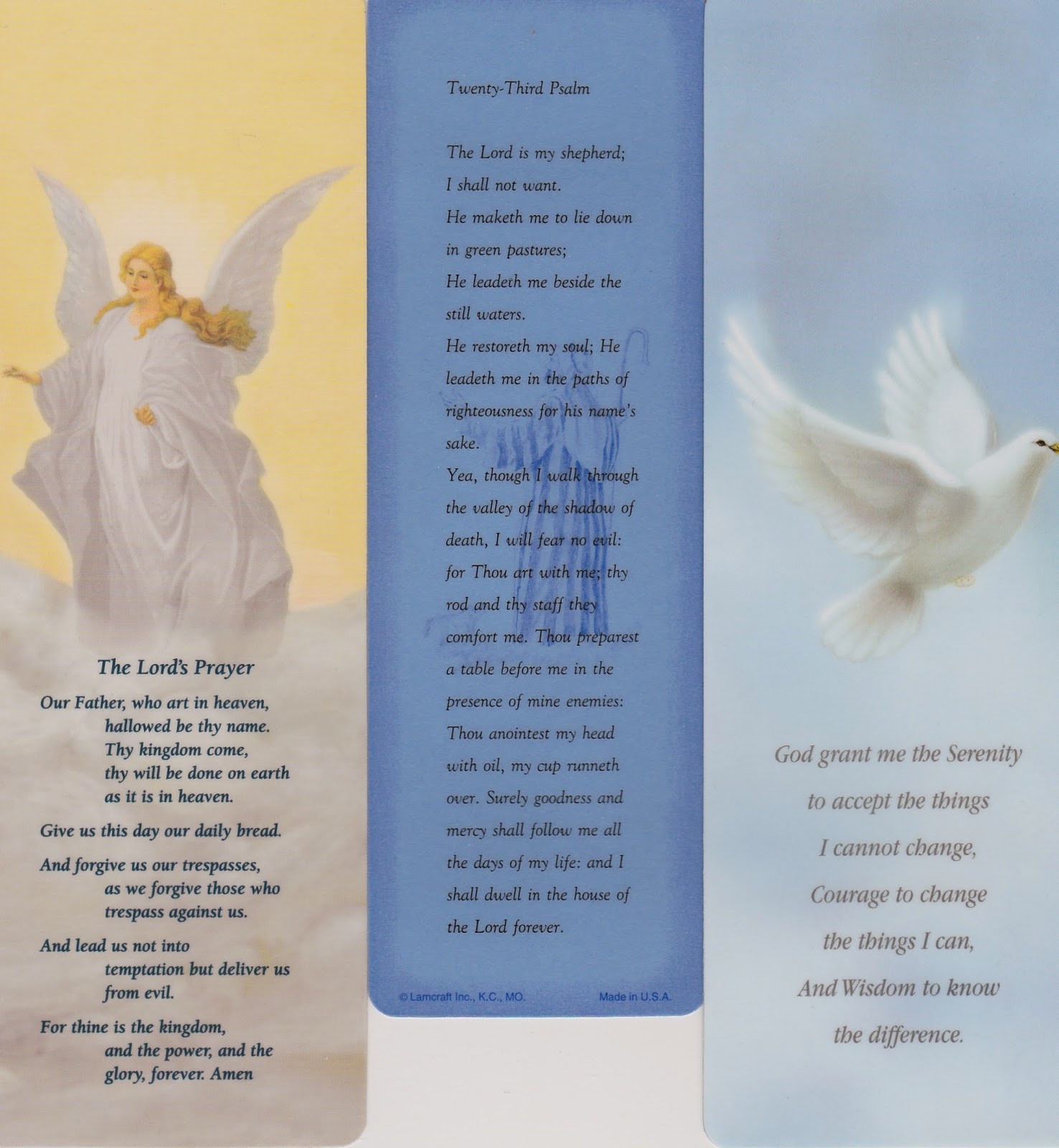 On the back of each prayer card/bookmark is Kenny's obituary. It was published on February 11th, 2000 in the Greensboro News and Record. It was published in Rock Hill, South Carolina where Marc, Ann,and David were living at the time. 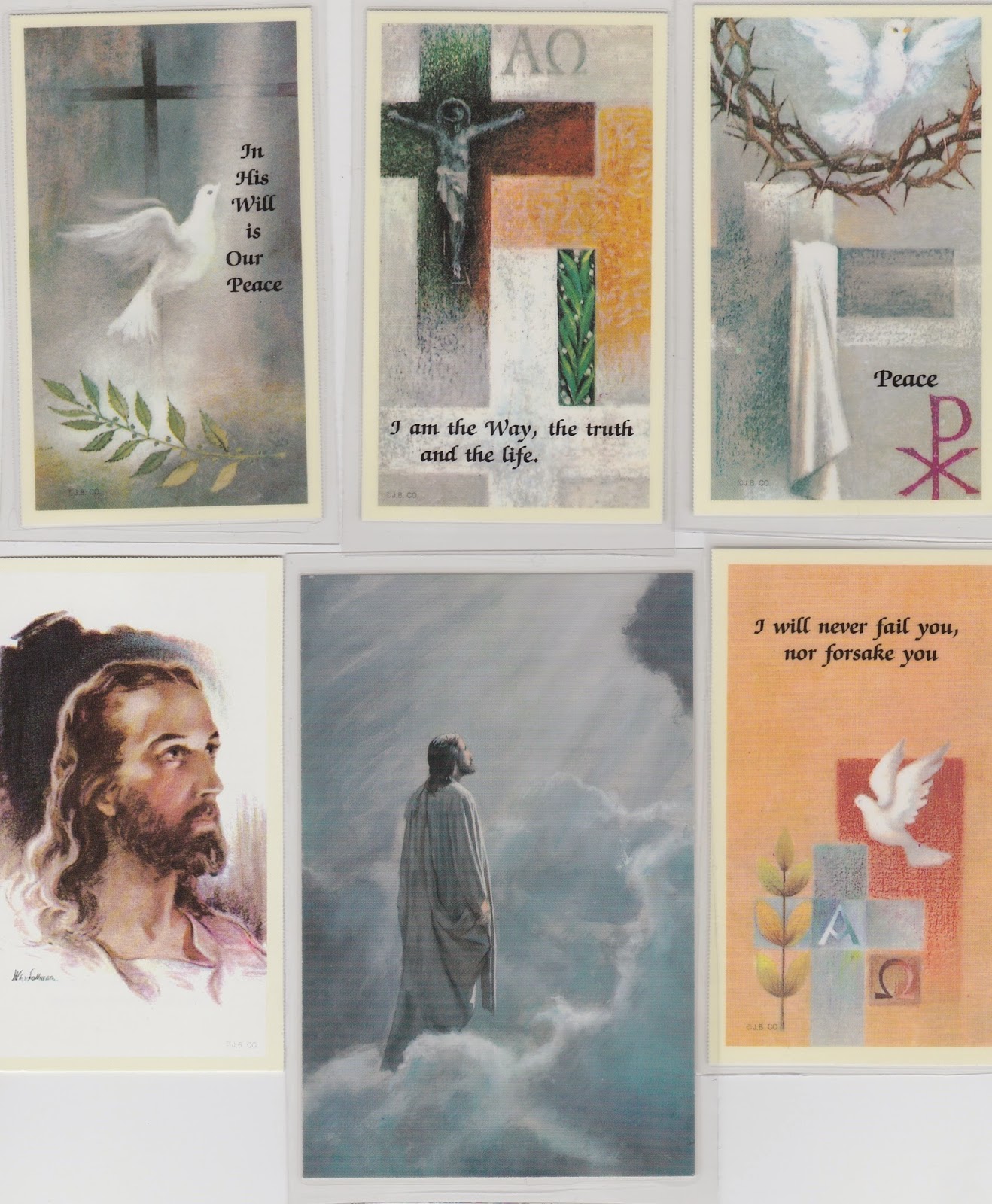 The Funeral cards above were made by the funeral home. Each of the cards has "In Memory of Kenneth Kitts October 10, 1908-February 9th, 2000. Of these, four of them have the same prayer, known as the "Gentlest Heart of Jesus" prayer.  One the cards has the prayer of "St. Francis of Assisi" and one has the "Safely Home" poem.

My family and I received so many Mass cards in memory of Kenny that I cannot possibly share all of them. Each of them are beautiful. Most of the Mass cards were for our home church, Our Lady of Grace Catholic Church and were set for very specific days and Masses. We also received several Mass cards that are for perpetual Masses meaning that he will be remembered in daily Masses, First Fridays and Saturdays and the Feast Days of our Lord and our Lady as well as in prayers and rosaries. We also received Mass cards that were for a specific amount of time such as 5, 10 and 15 years of daily Masses, prayers and rosaries. 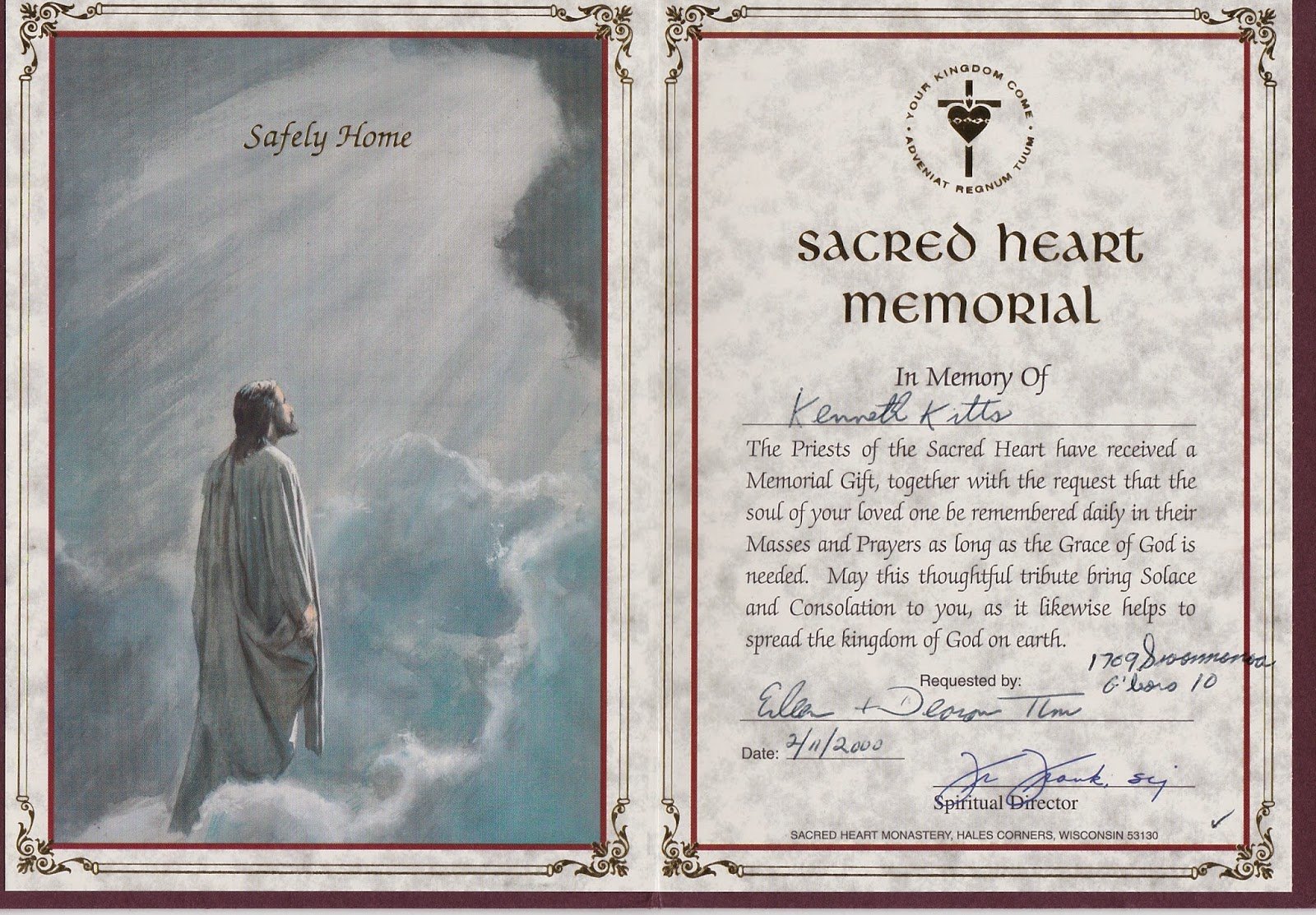 The Mass card above is on beautiful maroon heavyweight linen paper with gold lettering on the front. When you open the card the first thing you see is the poem, Safely Home. When you turn the page you see this is what you see. It is from the Sacred Heart Monastery in Hales Corners, Wisconsin. We received this Mass card from Deacon Tim and his wife Eileen. I've known Deacon Tim and his family for many years and went to school with several his children. 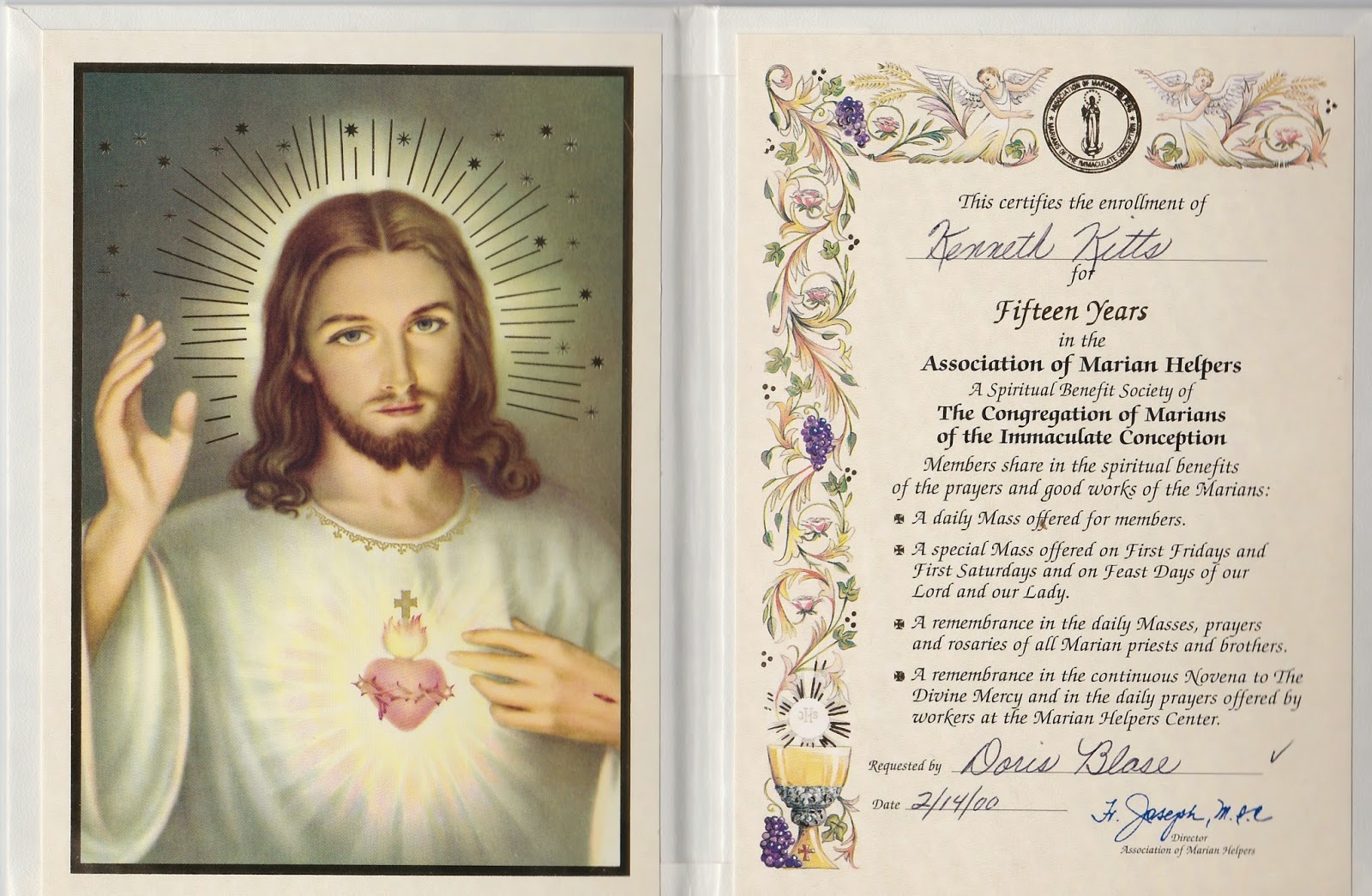 The Mass card above is a small white, hard bound card. The front is done in gold writing. As you can see Kenny was enrolled for 15 years of Masses. It is from the Association of Marian Helpers, A Spiritual Benefit Society of The Congregation of Marians of the Immaculate Conception located in Stockbridge, Massachusetts. We received this Mass card from Doris Blase, a friend of my Mom's. 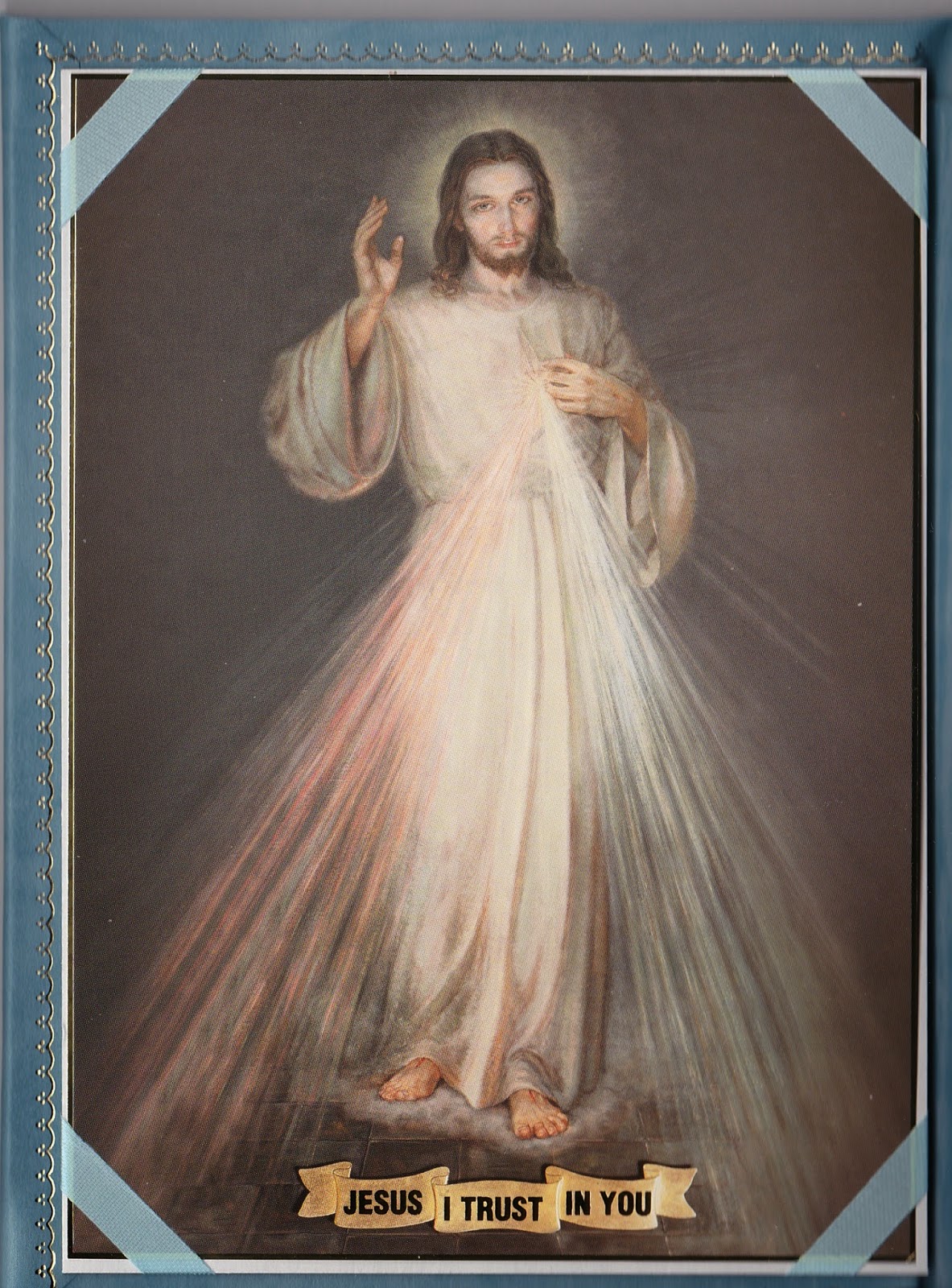 The Mass card to the left is a small blue bound card. It is a Perpetual Enrollment card. This is also from the Association of the Marian Helpers in Stockbridge, Massachusetts. As you can see in the picture to the left, is a beautiful the photo of Jesus. It is beautifully tucked into pale blue ribbons to hold it in place.

We received this Mass card from Fr. David. We have known Fr. David for many years and I will never be able to thank him enough for being with our family during this tragedy that had to face and overcome. 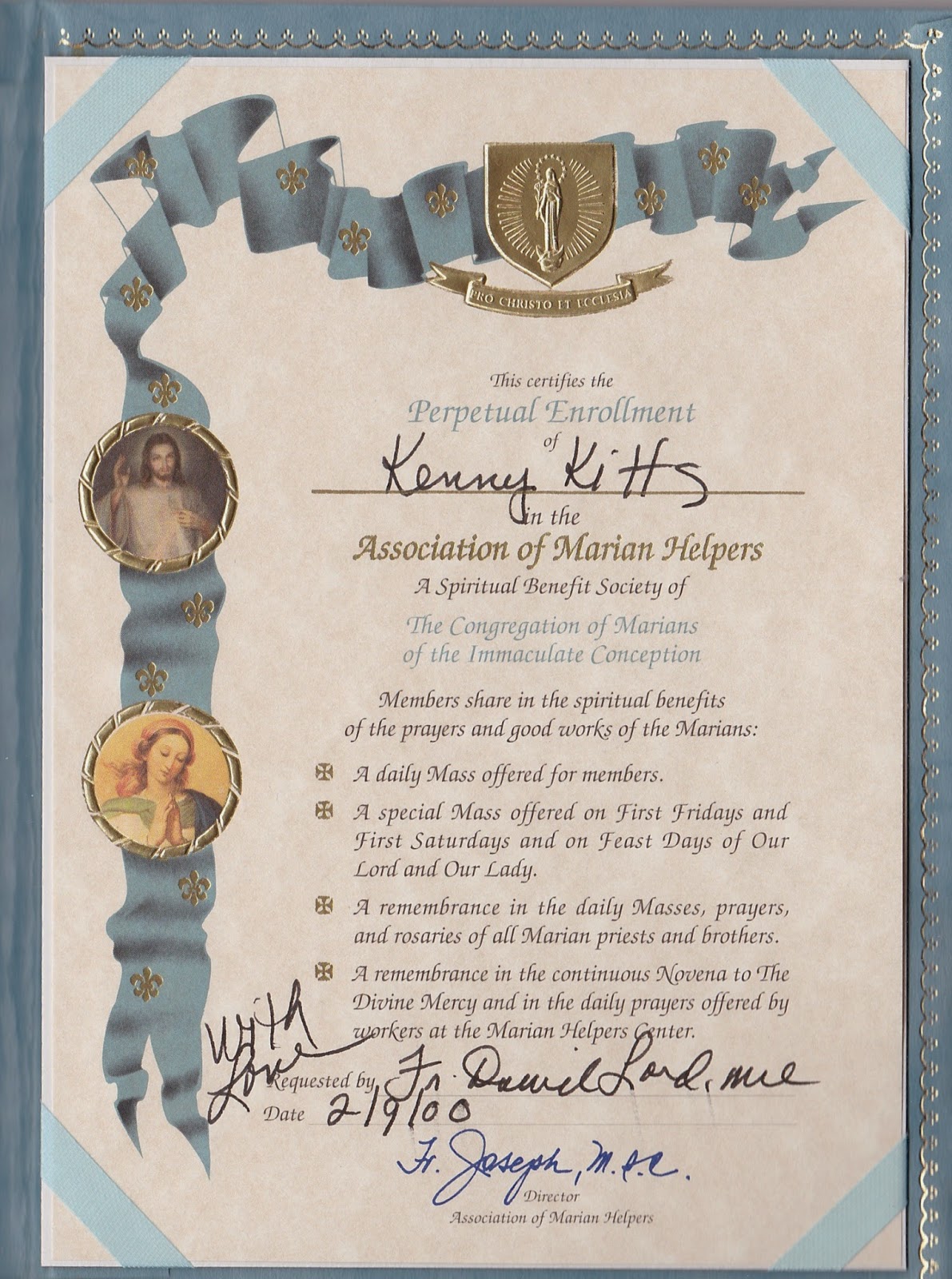 Email ThisBlogThis!Share to TwitterShare to FacebookShare to Pinterest
Labels: 2015, 2016, Deaths, February 2015, February 2016, The Kitt's, The Williams's