Update: Apparently in my effort to get back on track with the 52 Ancestors in 52 Weeks and to finish my story about Charles Coulson Rich, my Mormon Pioneer I have made a grave error. I just realized that I failed to post part one of the story! My apologies everyone! 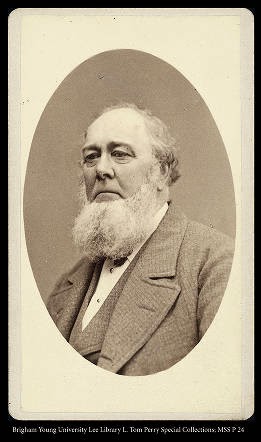 Meet my Mormon Pioneer, Charles Coulson Rich. He was truly a pioneer and frontiersman.

He was born in Big Bone, Kentucky on August 21, 1809. Within two years of his birth the family would move to Switzerland County, Indiana. Here the family resides until 1829 when Joseph moves the family west to Illinois.

The Rich family arrives in Tazewell County, Illinois on October 7, 1829. Charles is ready to start his own life. He has been trained as copper, able to make and/or repair barrels and casks. However, Joseph and Nancy are reluctant to let him go out on his own. He spends the winter of 1829-1830 teaching reading, writing and arithmetic.

By the spring of 1830, Joseph and the family have settled at Farm Creek, Illinois. They were not far from Fort George Rogers Clark (now present day Peoria, Illinois). The Rich family had only a handful of friends at this time. These were the families of Morris Phelps and Sanford Porter, Sr. They were very influential men in Charles's life.

In 1831, it would be Morris Phelps who tells Charles about the Book of Mormon and the Prophet. Charles yearns to learn more about this new religion.

In 1832, two Mormon missionaries appeared in the community in which Charles and his family lived. After learning more information from these missionaries, Charles, his parents and his sister Minerva were all baptized on April 1, 1832 into the Church of Jesus Christ and the Latter Day Saints. His sisters, Artemisia, Jane and Nancy would all be baptized into the Church not long after this.

On May 7, 1832 Charles and two Mormon Elders, Zebedee Coltrin and Solomon Wixom set out for Kirtland, Ohio. Along the way they stopped in other Mormon communities and on May 16, 1832 in Fountain County, Indiana that Elders Coltrin and Wixom ordained Charles as an Elder of the Church of Jesus Christ and the Latter Day Saints.

Not only is Charles a new convert but he also a new preacher and new elder. On their trip east to Kirtland, Charles would preach his first sermon. As the men continued on their journey they would stop at other communities of the Mormon Church preaching and visiting. They finally reached Kirtland in June 1832.

Charles would be in Kirtland, Ohio for roughly six weeks. During this time Charles would attend various church meetings. Not long after his arrival in Kirtland Charles received a recommendation of good standing. This recommendation was comprised of other members of the Church mainly Elders, Priests, Teachers and Deacons who would judge him on his morals and Christian accomplishments. He was found worthy of the testimonials he received and was granted a certificate stating that was a regularly ordained Elder of the Church which recommended him as a man of God and friend to mankind for all people. This must have been quite an honor to have been so graciously accepted! Especially since he had only been baptized two months prior and ordained an Elder a month earlier.

Charles and Solomon Wixom would leave Kirtland in August 1, 1832 and would stop in Cleveland and Steubenville, Ohio and what is now Wheeling, West Virginia. From Wheeling they would travel by steamboat to Cincinnati, Ohio. After one day in Cincinnati, Charles would then take another steamboat to Sun Rise, Indiana where he stayed for two months. While there he visited with family and friends, as Sun Rise was not far from where he grew up.

Charles would arrive home in Illinois on  October 23, 1832. During the remainder of 1832 and for next several years, Charles stayed in Illinois working the family farm, planting and harvesting crops as well as putting his training as a cooper were put to good use building barrels, tubs, casks and buckets. He also had his religious duties to attend to as well.

During this time, Charles's sisters would all marry. His sister Artemisia had married Jesse Atwater Wixom in April of 1831. Artemisia and Jesse would raise their family in LaSalle County, Illinois; sister Minerva would marry Asa Colton Earl in January of 1834 but died shortly after the birth of her daughter, Nancy Minerva Earl in 1840. In November 1837, his sister Jane Ann married Hervey Green; sister Nancy would marry in February of 1837 to John President Porter and both of these sisters and their families, and their parents would follow their brother to Utah.

In 1836, it was clear that those of the Mormon Faith and those who were not could coexist peacefully. A proposal was made by the Missouri state legislature in which Caldwell County was created in northwest Missouri. However, with thousands of converts flocking to Caldwell County they soon out grew their county boundaries.

In July and September of 1838 Charles and his father, Joseph bought land in Caldwell County, Missouri. According to land records they were co-owners of the property. Together they built a home for the family and one for Charles and his bride, Sarah DeArmon Pea. Charles was a leader in the Mormon community in Caldwell.

On election day, in August 1838 a brawl broke out in Gallatin between members of the Church and members of the community. The local community militia began patrolling the area as did the Church militia. The tensions between the two groups continued to escalate on into October of 1838. Then on the night of October 24, 1838, was the Battle of Crooked River. John Lockhart, a Missouri sentry shot Patrick O'Bannion, a scout for the Mormons. He would later die from the wound.Charles was on of the leaders who would lead the charge on the militia camp. These last few days of October saw the tensions rise even higher resulting in Missouri Governor Lilburn Boggs to order the Missouri militia to war with the Church of Jesus Christ and the Latter Day Saints and to issue an Extermination Order on October 27, 1838. The extermination order reads in part,

"...open and avowed defiance of the laws, and of having made war upon the people of this State ... the Mormons must be treated as enemies, and must be exterminated or driven from the State if necessary for the public peace—their outrages are beyond all description." 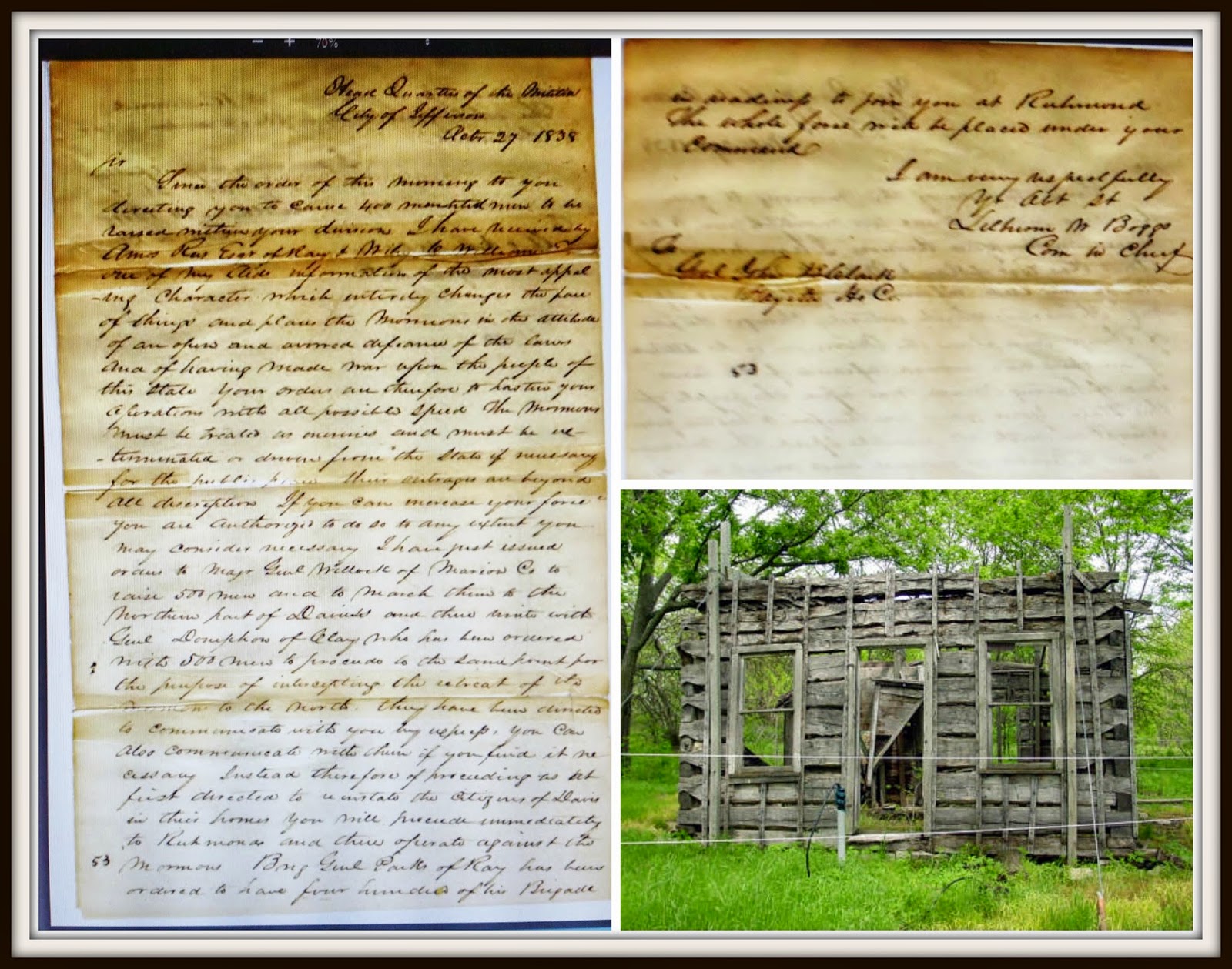 By November of 1838, Charles fled from Missouri to avoid being arrested for his involvement at the Battle of Crooked River. He left his wife Sarah behind. Eventually with the help of her father, John Pea she left Missouri. She was not in good health and made the trip to the Mississippi confined to wagon. When Charles learned that Sarah had finally arrived on the shore of the Mississippi he crossed the river by canoe to see her. The next day he took Sarah back across the river to Illinois.

My next blog in this series will be about Charles and his first wife Sarah DeArmon Pea.

Email ThisBlogThis!Share to TwitterShare to FacebookShare to Pinterest
Labels: 2015, 52 Ancestors in 52 Weeks Challenge: 2015 Edition, February 2015, My Mormon Pioneers, My Pioneers, The Rich's