While taking a walking tour of Bonaventure Cemetery in Savannah this summer I tried to find unusual family plots that were of interest to me. I am not related to this particular family but I love this family plot. I like the way that adults are arranged in front with the children behind them as if they are being protected. These pictures are examples of cradle graves, in particular these cradle graves are known as headboard and footboard cradle graves. The headstone acts like the headboard of bed while the smaller footstone acts as the footboard. 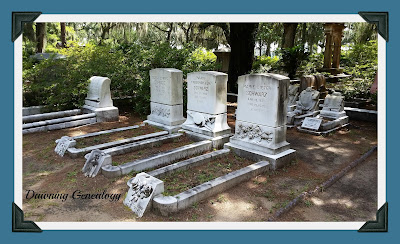 Of the three large cradle graves (see the photo above) the center one belongs to Major Frederick Adam Rudolph Schwarz (1866-1917), a first generation German American. His wife Mary "Mamie" Dieter Schwarz (1871-1930) is to the right of him and their son George Edward Schwarz (1900-1954) is on the side. I decided to research this family because I wanted to know more about them. Then I when I started researching and I learned of the tragedies that happened during the early years of Fred and Mamie's marriage. They lost 3 baby boys between 1894 and 1899. Then they lost a baby girl in 1902. How does one get over such deaths? I have lost a child and after nearly 16 years I am just starting to make peace with it. How did John and Mary cope? I've decided to tell their story to the best of my ability. 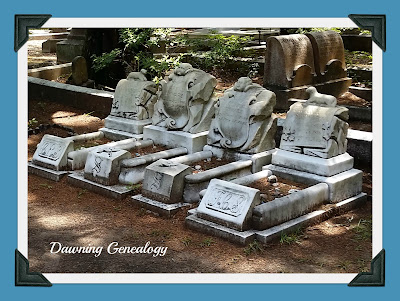 From the marriage records I have found Catherine married Edward Lee Roberts on October 22, 1919 in Savannah. I know that George married sometime between the 1930 & 1940 Census to Elma as they are listed as married in the 1940 census, however, after a diligent search in GA, SC, FL, and AL, I have not been able to locate a marriage record for them. John Nichols married on February 8, 1930 to Marjorie Ruth Bowen in Jacksonville, Florida.

This is everything I have learned about a family that I have absolutely no connection to whatsoever. So why did I do it? It is simple really, we all have a story that needs to be told and everyone should have someone to remember them, even when there is no one left to tell it but a stranger. Unfortunately,  I only found one or two people in "Ancestry's Public or Private trees" who were researching this family.

If you know someone who is related to the family of Frederick Adam Rudolph Schwarz and Mary E. Dieter please leave me a message here or message me through Facebook and I will be happy to share my information. Below is a partial list of my sources, my source list is very long so to save a little space and some time I have made it a shareable document. For the complete list please click here.