A pictorial version of the Route of the Mormon Pioneers from Nauvoo to Great Salt Lake.

In my previous post of Charles Coulson Rich, I tried to give a broad overview of his life and the events that happened in his life once he had converted to the Church of Jesus Christ of the Latter Day Saints. I had intended for the next post in this series to be about Charles and his first wife, Sarah DeArmon Pea. However, I feel it is necessary to finish with Charles first and then continue with each wife and that individual family.

Charles fled Missouri in November 1838 after the Battle of Crooked River and went to Quincy, Illinois. Upon his arrival in Quincy, Charles stayed with the family of George Crouch.  Charles rented a farm just outside of Quincy known at The Old Methodist Institute. Charles soon realized that the farm he had rented could not support his growing family. The small family returned to the home of George Crouch where they rented a room. Charles continued to work on the farm he rented and hired out to do jobs like rail splitting.

Charles and his family were in poverty at this point in time. Having fled Missouri with almost nothing but the clothes on their back and what items they could carry or take in a single wagon. They were not alone, everyone who had fled were in similar circumstances. In the past they had looked to the leaders of the Church, their Prophet Joseph Smith and other high ranking church members for economic and spiritual support. Most of these officials were still imprisoned in Missouri. The community of Quincy did what they could to help the Mormon community by hiring the men to work in whatever jobs they had.

In April of 1839, the leaders of the Church were released from prison. These leaders began looking for options as to where they might could settle next without fear of being forced to flee yet again. They found Commerce, Illinois about 50 miles from Quincy. Here the church purchased land and Charles once again became involved in the building of new community. He would purchase a plot of land and build a log cabin home for his family. The town of Commerce became Nauvoo in April 1940.

As it turned out, Sarah did agree with the idea of plural marriages and went so far as to help her husband choose who his future wives should be. It would be almost two years before Charles would take a new wife. In 1845, Charles would wed Eliza Ann Graves (2nd wife), Mary Ann Phelps (3rd wife) and Sarah Jane Peck (4th wife) over an eight day period between January 2, 1845 and January 9, 1845 at the Nauvoo Temple. On February 2, 1846 he wed Emeline Grover, his 5th wife. He married Harriet Sargent on March 28, 1847 in Winter Quarters, Nebraska as his 6th and final wife. Both Emeline and Harriet were 14 years old when they married Charles. 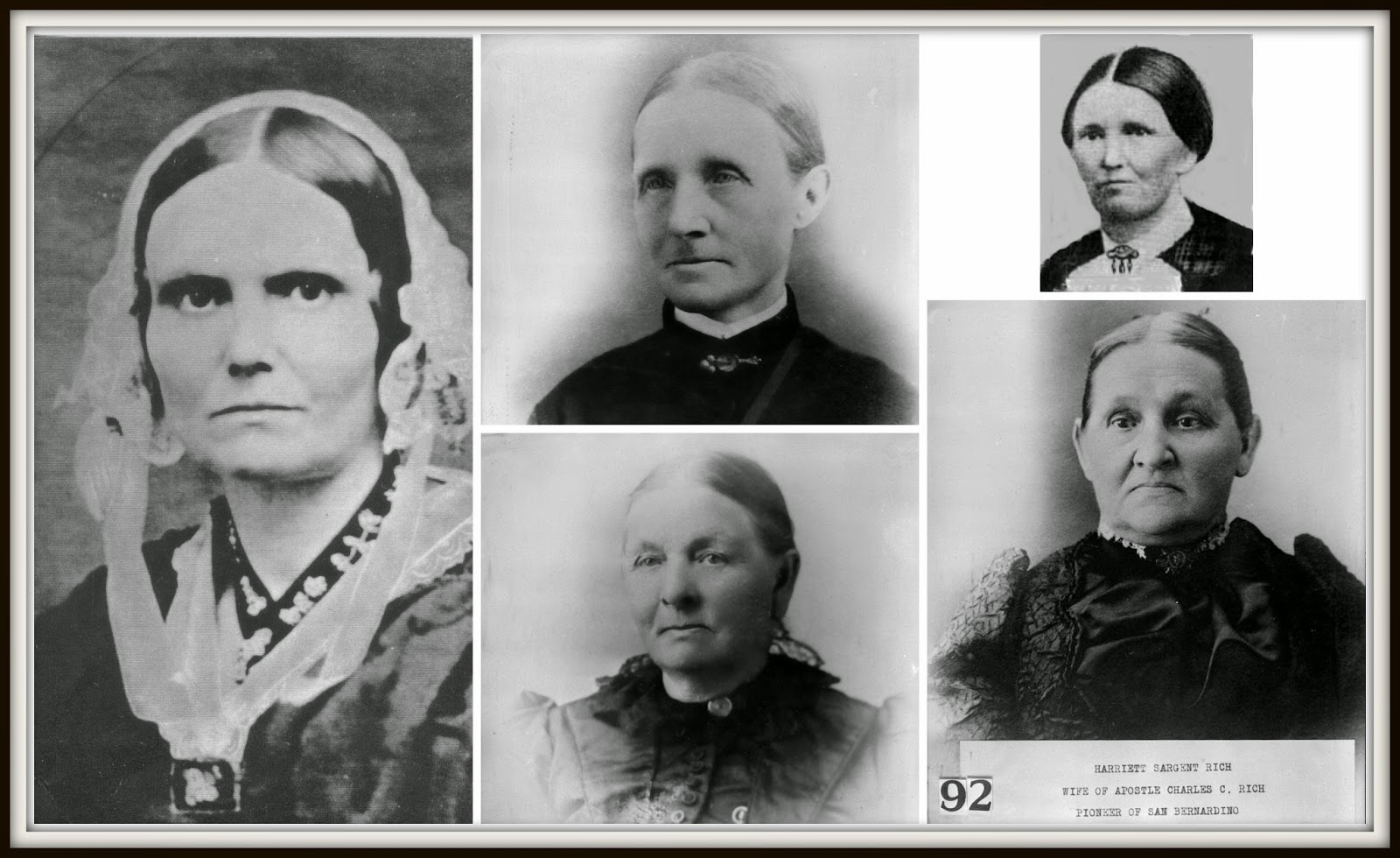 Charles Coulson Rich had six wives. Above are five of them. From left to right are Sarah DeArmon Pea, middle top is Mary Ann Phelps, middle bottom is Emeline Grover, top right is Sarah Jane Peck and lower right is Harriet Sargent.

Several events transpired in 1844 that accelerated the tensions between the Mormon and non-Mormon communities. The Nauvoo Expositor, was a newspaper published by former members of the Church who were critical of Joseph Smith. There was only one paper printed by The Nauvoo Expositor on June 7, 1844. On June 10, 1844 Joseph Smith orders the destruction of the newspaper office and printer. Eight days later, on June 18, 1844 Joseph Smith, who was also the mayor of Nauvoo at the time declared martial law and activates the Nauvoo Legion, the city's militia. An arrest warrant was issued for Joseph and his brother Hyrum. They agree to a trial in Carthage, Illinois Joseph and Hyrum were jailed and awaiting trial. Then three days later, on June 24th the Carthage jail was attacked by mob. Joseph and Hyrum Smith were killed and no one was ever charged with their murder. These events would pull Charles in and alter his world yet again.

Stay tuned for the rest of Charles Coulson Rich's story and those of his wives and their respective families.

The Church of Jesus Christ and the Latter Day Saints, Plural Marriages and Families in Early Utah https://www.lds.org/topics/plural-marriage-and-families-in-early-utah?lang=eng) accessed 15 September 2014

Email ThisBlogThis!Share to TwitterShare to FacebookShare to Pinterest
Labels: 2015, 52 Ancestors in 52 Weeks Challenge: 2015 Edition, February 2015, My Mormon Pioneers, My Pioneers, The Rich's