Who is William Rueff, my immigrant ancestor?

Back to the drawing board, again! My first problem with William is finding out exactly when he immigrated with his family to the United States. I have not been able to find a passenger list for William since I began my research in the early 1980's. I am beginning to wonder if it may have been lost or possibly destroyed. There are many Rueff families who immigrated to the United States in the 19th century and many more named William but none of them are the William Rueff I am hoping to find.

Since I have not found any passenger lists for William, his wife Favilie and their son, Charles Karl, I decided to take a closer look at the census records. I know that William and his son made it to Louisville but what happened to Favilie? Did she die on board the ship they were traveling on or did she die after they arrived in the United States? I have been through passenger lists and indexes for Louisiana, Maryland, Massachusetts, New York and Pennsylvania with no luck. There are plenty of Rueff's who immigrated to the United States but none of them in the time frame I am expecting William and his family to be in.

The second problem I have with William is his place of birth. Census records state he was born in Germany. Previous research lists his place of birth as Alsace, France. With the ever changing boundaries of Europe in the 17th and 18th centuries it is difficult to know which place is correct. I've been searching through new databases on Ancestry.com hoping to find a marriage record for William and so far I have not found a record. I am also looking for a birth record for William's son Charles Karl in these new databases but again I have found nothing.

According to previous research William arrived in Louisville about 1820 but I cannot locate any census records for William prior to 1850. The only census records I find for William Rueff are the US 1850 and US 1860. I then decided to start going through census records for the major Atlantic seaports from 1817-1840. I looked at Massachusetts, Maryland, New York and Pennsylvania and have come up empty handed. Where were William and his family between 1817 and 1840?

I went back to the US 1850 Census record and discovered that I missed a really important clue in the past. There was living with Charles Karl is a John Rueff age 24, Charles Rueff age 22 and Henry Rueff age 22 all born in Barvaria. How could I have missed this? I'm very particular about census records and make sure that I go through all the names to be sure I have the right names, dates and places. Shame on me! 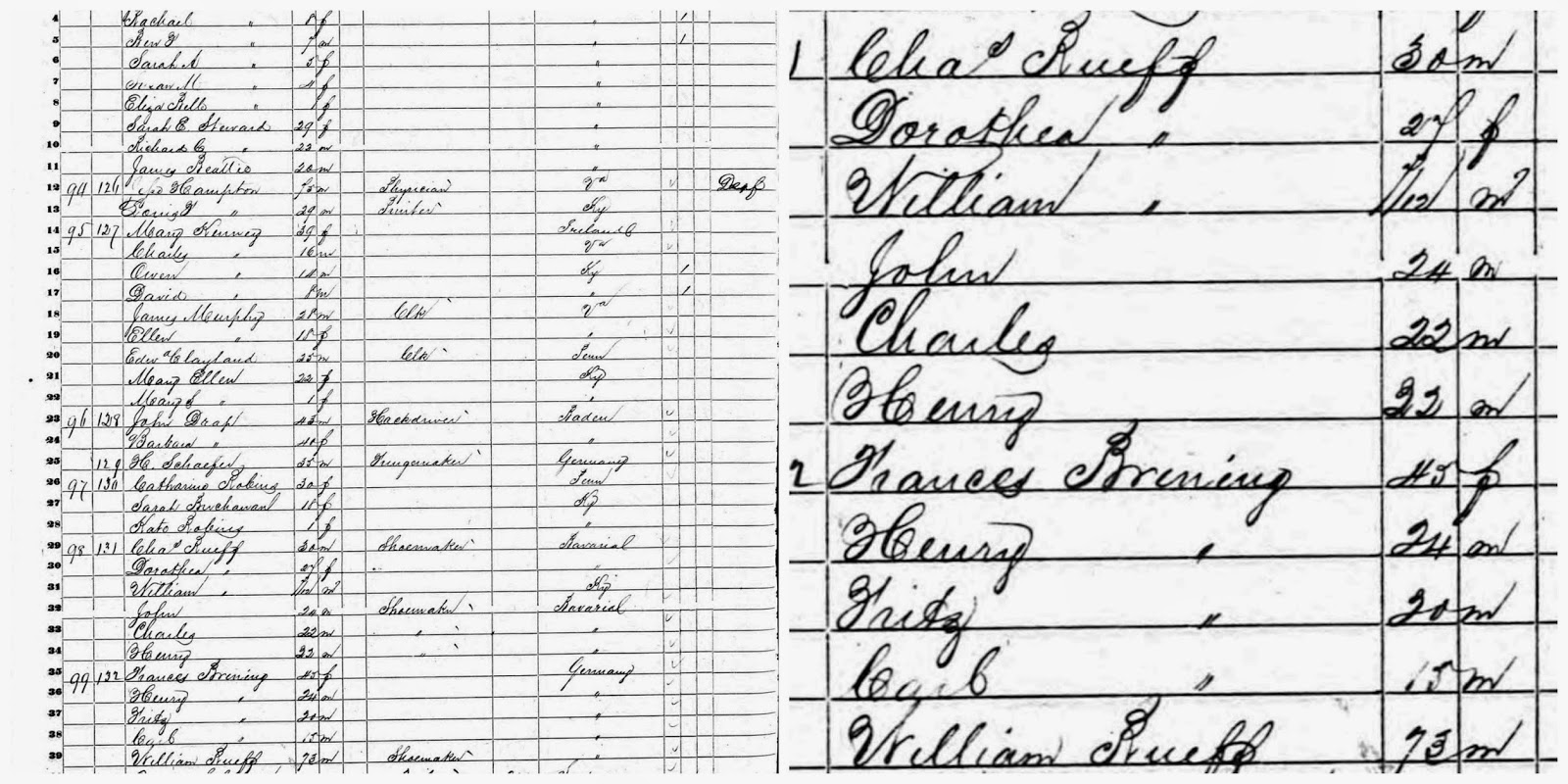 In the above picture is the US 1850 Census record for Charles Karl Rueff and his family. The picture on the left is a cropped version that shows Charles's family and the family of Frances Brening/Brining living next door and Charles Rueff's father William, is living with her. Charles, John and William are all listed as shoemakers. So why is William living with Frances Brening/Brining? I have more questions than answers at this point. I've tried to follow the Brening/Brining family but it only leads to information that is not related to my Rueff family.

Now I need to follow John, Charles & Henry Rueff to see where they take me. These young Rueff men are certainly old enough to be the sons of William however previous research has found no record that William and Favilie had any other children. Are they nephew's of William? Are they even related to each other?

Email ThisBlogThis!Share to TwitterShare to FacebookShare to Pinterest
Labels: 2014, How Do I Set the Record Straight 2014