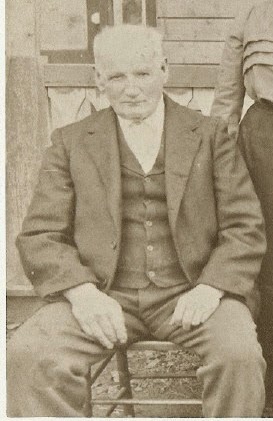 Meet Henry Kitts, my children's 3rd great paternal grandfather. He was born in August 1824 in Grainger County, Tennessee, his death certificate gave his age in years and months so I used a birth from death calculator such as this one at Ancestor Search (http://www.searchforancestors.com/utility/birthday.html) to try and determine when he might have been born in August. He was probably born on or around August 14th.

The Children of Henry and Frances:

The eldest son of Henry and Frances is Simeon Acuff Kitts who was born September 27th, 1845. He married Elizabeth "Betty" Harrell on 31 January 1867. Elizabeth is the daughter of James Calvin Harrell and Rachel Bundren of Grainger County. Simeon and Betty did not have any children that I have been able to find. Elizabeth "Betty" Harrell Kitts died on April 14th, 1920. Simeon died on May 7th, 1926 in Knoxville, Tennessee and they are both buried in the Kitts Cemetery in Washburn, Tennessee.

The third son of Henry and Frances is Orvel Lee Kitts. Orvel is the 2nd great grandfather of children. He was born July 2nd, 1853. He married Susan Mary Williams on October 14th, 1877. She is the daughter of David Beeler Williams and Matilda Clark also of Grainger County. Orvel and Susan had twelve children. I will be discussing Orvel and his family in great detail in a future post. 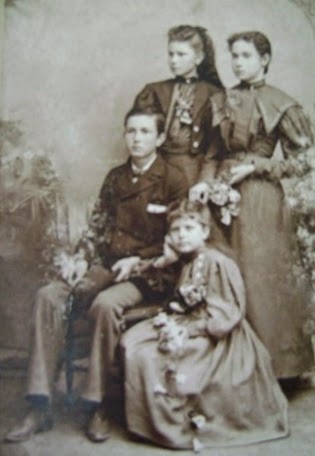 Laura out lived both Rector and their children. Ruby and Lula died three weeks apart in February of 1906. All of Laura and Rector's children were born and died in Knox County, Tennessee. All four children died of tuberculosis and are buried in the old Mayes Chapel Cemetery. In the photo to the left are the children of Laura and Rector, standing (L-R) are Estelle and Ruby and sitting in front (L-R) are Frederick and Lula. 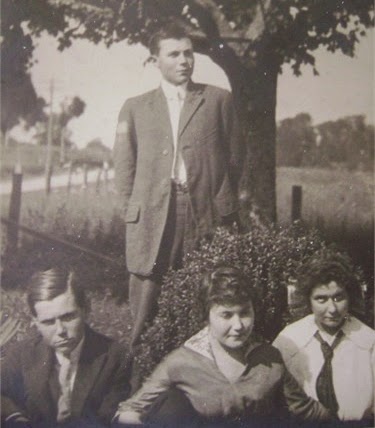 John B. J. Brickey died on 24 January 1905 in Knox County. Laura died on October 31st, 1952 in Knox County, just ten months after son Leonard. Frances and Audrey died seven weeks apart in 1982. In the photo to the right are the children of Laura and John, standing is Leonard and from L-R are Lillard, Frances and Audrey. Both this photo and the photo of Laura and Rector's children are courtesy of Doug Akins.

I am still researching the following children of Henry and Frances: Asa Joel Kitts (1847-????), Corum Clay (1865-1886), and James Alexander (1871-????). My theory for Asa Joel and James Alexander is that they died in childhood and that finding death records will be next to impossible because the state of Tennessee only has them for 1909-1912 and 1914-1955 which are available on www.ancestry.com or on www.familysearch.org. I believe Corum Clay married between the 1880 Census and his death in 1886. I have 2 possible candidates and unfortunately they have similar names. The marriage bonds list the groom as "C.C." Kitts. One of the problems I have had in researching the Kitts family is the same naming practice that went on for several generations.

The photo to the left is from his company  descriptive book. According to the description, Henry was 35 years old, his height was recorded as 5 feet and 8 inches with a fair complexion, hazel eyes and brown hair. It confirms that he was born in Grainger County, Tennessee and lists his occupation as a farmer.

Henry enlisted on July 26th, 1862 in Coumbd Gap, Kentucky.  I believe this abbreviation is actually for Cumberland Gap, Kentucky. He was enlisted by Captain James W. Branson, also of the 1st Tennessee Regiment, Company D. The term he agreed to was for three years.

What I found interesting about this particular page in Henry's record was the remarks section. It reads, "Deserted Oct 20 1864, while of furlough. Returned Dec 30, 1864 and restored to by order from HeadQrs. 4, Div 23 A.C., without loss of pay or time having bee improperly reported a Deserter. Discharged at Knoxville, June 21, 1865. (over) in accordance with instructions received from War Dept., A. G. O." 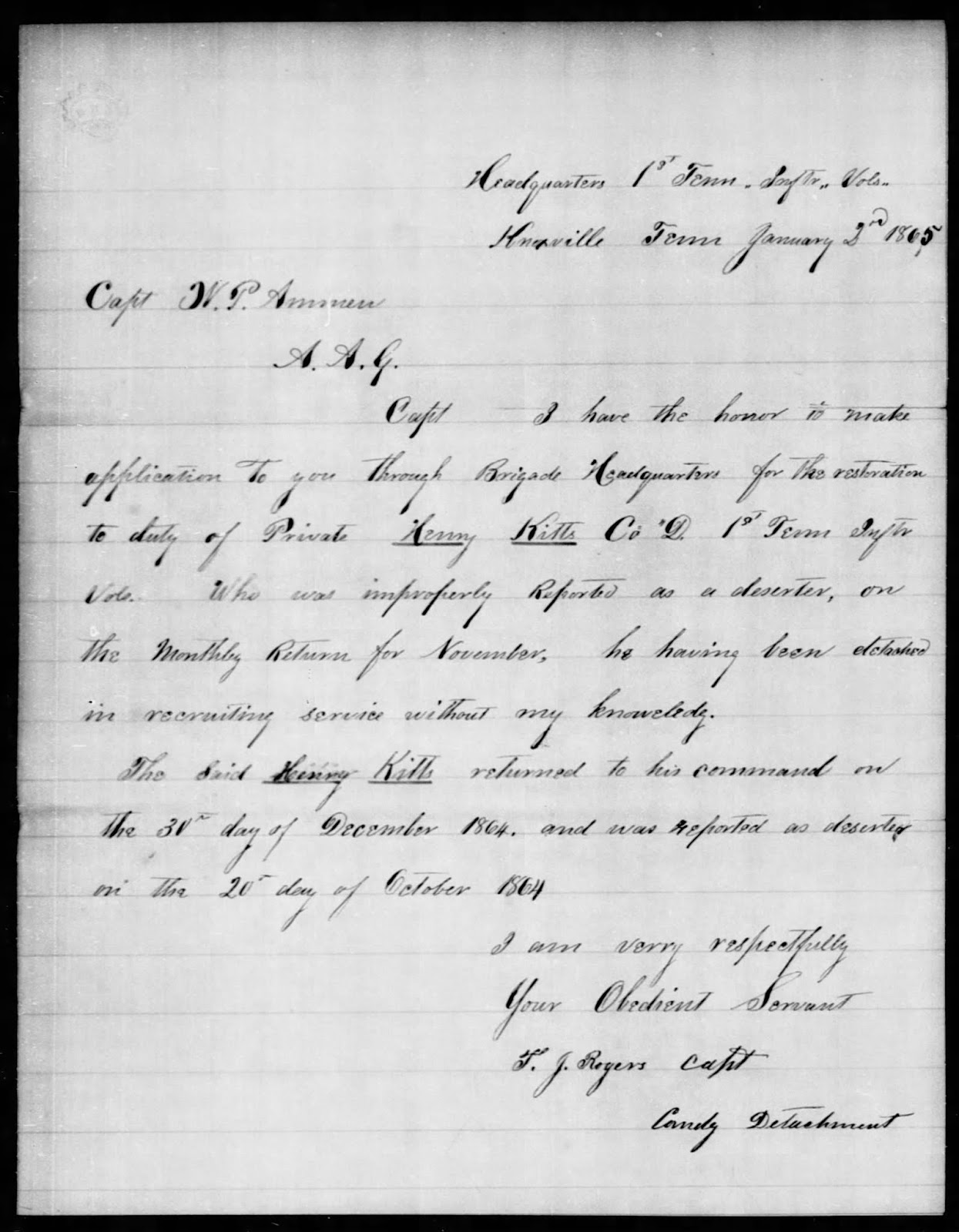 The last page in Henry Kitts records at www.fold3.com was a letter (image to the right) addressed to Captain W.P. Ammen. The letter is from Captain T. J. Rogers. In the letter he explains that Henry Kitts was improperly reported as a deserter in the monthly return for the month of November 1864. Captain Rogers explains that Henry was in fact detached for recruiting service without his knowledge.

In April of 1913, Henry Civil War service would again come into question. I believe this may have been in regards to his pension application. It lists a claim number 582218. This same number appears as a certificate number on his Civil War Pension Index card. I see a trip to NARA in Washington in my future. 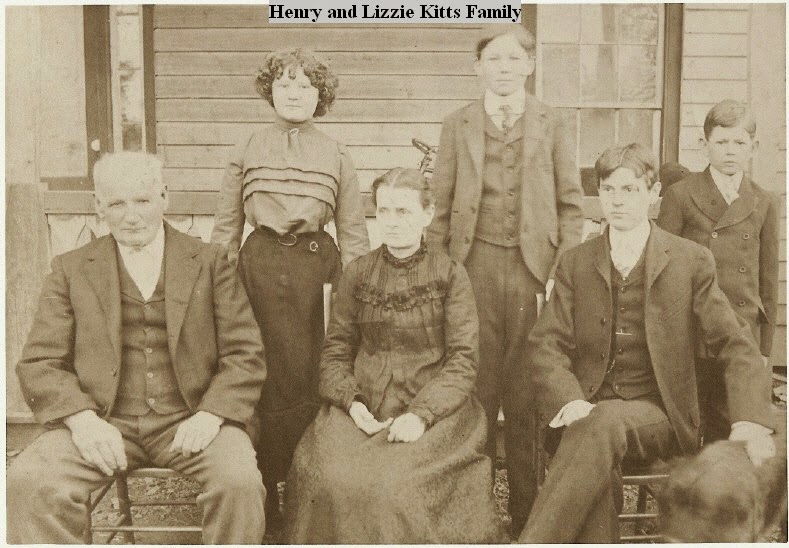 Henry's Death Certificate and who is his mother?: 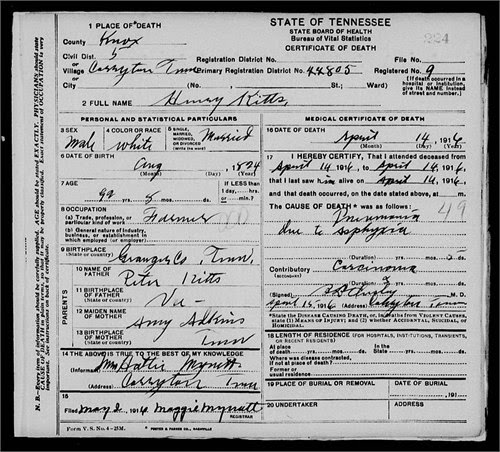 According to his death certificate, Henry is the son of Peter Kitts, Jr and Amy Dyer Beard Adkins. Amy and Peter were married on May 11th, 1812 in Grainger County, Tennessee. I have seen multiple online trees that state Amy died before March of 1821. Henry's father, Peter Kitts, Jr married his second wife, Elizabeth Nicely in March of 1821. This date comes from Peter's War of 1812 pension papers.

From the forty plus documents I saved and read there is no marriage record or affidavit from anyone who attended the wedding or could confirm that it actually took place. I have other pension papers in my possession for various other relatives and there is some type of document that corroborates this marriage to Elizabeth. I have tried to find a marriage bond or license for Peter and Elizabeth in Tennessee, North Carolina, Virginia, and Kentucky but but to no avail.

My first goal with Henry is to prove whether Amy Anna Dyer Adkins is or is not Henry's mother as his death certificate indicates. Performing a yDNA test would confirm the link to Henry and  Peter but mtDNA tests will not help as it appears that Peter and Elizabeth did not have any female children that I have been able to find.

My second goal with Henry is to exhaust every possibility and to determine what happened to his sons, Asa Joel, Corum Clay and James Alexander. In an effort to do that I am reaching out to another researcher of the Kitts family whom I have heard a lot about but have not met. Hopefully he can shed some light on the lives of these three sons.

Note: I have multiple sources and can furnish them upon request.