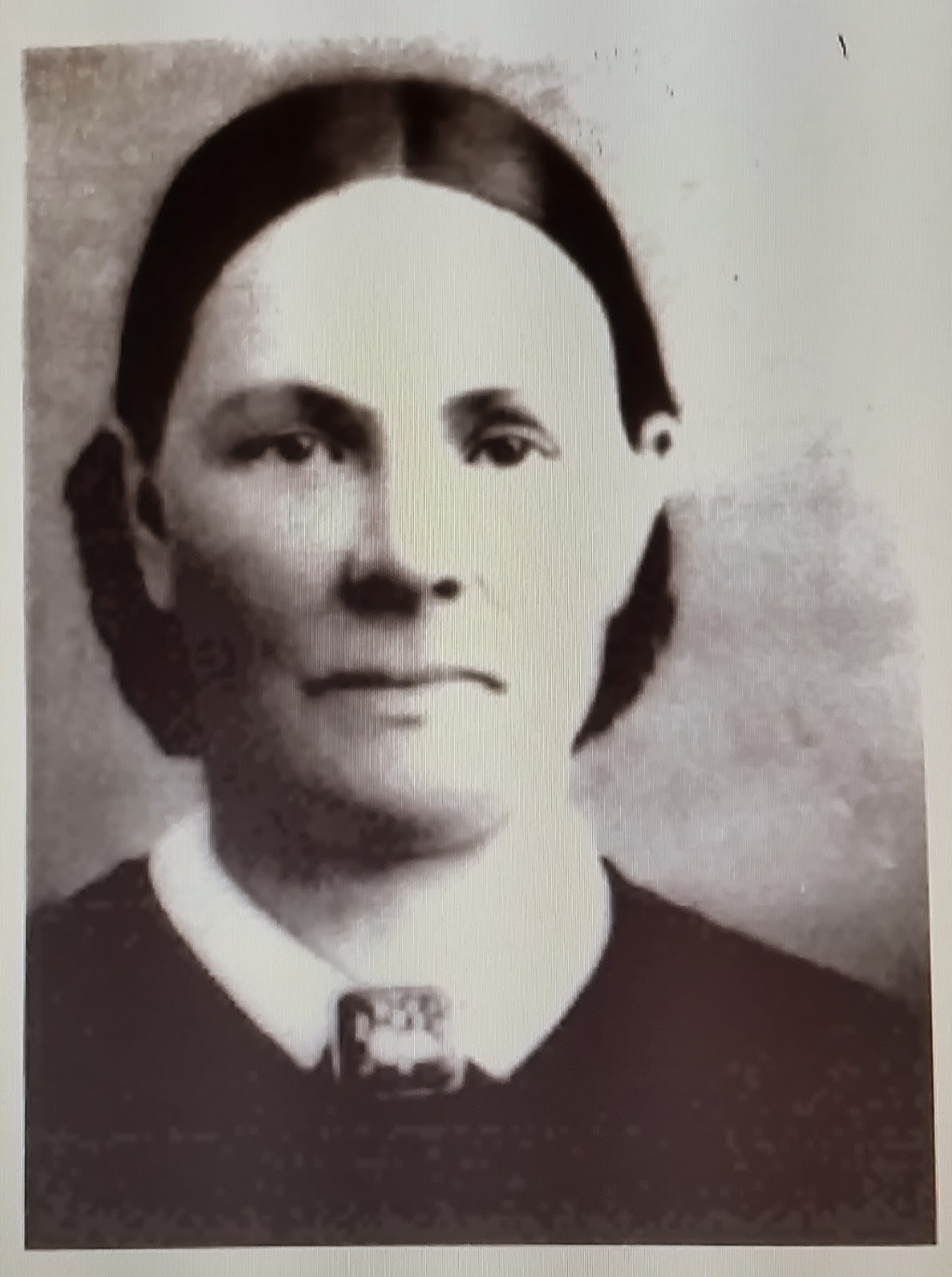 Charles Coulson Rich and his first wife Sarah DeArmon Pea chose Emeline Grover to be his fifth wife. Emeline was born on July 30th, 1831. She was the second daughter of Thomas Grover, III and Caroline Whiting Grover in Freedom, New York. Her parents converted to the newly formed Mormon church sometime between 1830-1834. As a child, Emeline felt and witnessed first hand the uprisings, violence and persecution that were directed at her Mormon community for their religious beliefs. Emeline's father, Thomas, was a personal bodyguard for the Prophet, Joseph Smith. Because of Thomas Grover's position with the Prophet, the Smith and Grover families were very close.

In 1835 the family moved to Kirtland, Ohio where he helped build the temple. From Ohio, the family moved to Far West, Missouri, where they endured religious persecution. The family fled from Missouri in 1839, went to Quincy and the Nauvoo (formerly Commerce), Illinois, where her mother Caroline and her sister Emma both died in October 1840. This left Thomas alone with six little girls under the age of twelve to care for on his own. How terrified young Emeline must have been during these turbulent times.

By late 1845 or early 1846 Emeline found herself working in the home Charles Coulson Rich. As it became clear to the Rich family that they would be heading out west Charles and his first wife, Sarah DeArmon Pea Rich decided that Emeline should become the fifth wife of Charles. After speaking with Emeline and her father, Thomas Grover and obtaining their consent to marriage, Charles and Emeline went to the Nauvoo Temple where they were married on February 2nd, 1846 by Heber C. Kimball. Emeline was 15 years old when she married Charles Coulson Rich.

The early years of her marriage to Charles could not have been easy for Emeline. She had no sooner wed him, then they were fleeing from Nauvoo and starting the trek to the Great Salt Lake Basin. I can imagine that sleeping in tents or in wagons were not exactly conducive to encouraging this young woman in the intimate and private ways of a husband and wife. This was a journey of hardship for all who traveled in the company. They dealt with the weather, from wind and rain to snow, ice and bitter cold. There were food shortages, illnesses, injuries and death to overcome. The company traveled by wagon, handcarts and of course walking. Due to the Mexican-American War (1846-1848) many of the young men joined the Mormon Battalion, when the federal government came calling for volunteers. This meant that the women of the company had to drive the wagons and pull the handcarts or they would be left behind.

However, through it all Emeline persevered and accepted the challenges that she faced. When they finally arrived in Salt Lake in October of 1847, there was much to do to prepare for the coming winter. Emeline lived with her father Thomas during that first winter in Salt Lake. She also attended the school which was taught by Alvira Cole Holmes. Then in 1848, her father moved to Centerville, Utah and she was left to manage her father's newly built log cabin home. It was in this home that Emeline began teaching school herself.

The trek from Salt Lake to San Bernadino was just as grueling and maybe more so than the journey from Nauvoo. They endured the some of the same hardships as they had previously experienced but now they also faced new ones as well. Within Utah they had had to deal with blizzards, mud and Indian attacks. During this trip they had to cross two deserts, one in Nevada and the other in California and they were long hot, dry, and dusty miles. They had to carry water not only for themselves but for the animals that traveled with them. Once they emerged from the Sierra-Nevada Mountain into the valley of San Bernadino the company halted. For three months they stayed here making repairs to wagons and carts, purchasing food for hundreds with less than $1,000 dollars, and making preparations for the remainder of their journey including the purchase of land for their settlement.

Emeline was thrilled to finally have a home after spending so much time out in the open country. She relished taking care of her home and her son Thomas. After more than a year in San Bernadino, Emeline gave birth to her first daughter in January of 1852. The child was named Caroline Whiting after her maternal grandmother who died twelve years before. During the first few years of the settlement of San Bernadino, Charles would become the second mayor of the community. She and Charles would have another daughter, Nancy Emeline who was born in February of 1854. During the year of 1854, as the community was prospered there were also signs new challenges and old rumblings from the past that were bringing flashes of Far West and Independence, Missouri; Kirtland, Ohio and Nauvoo, Illinois. 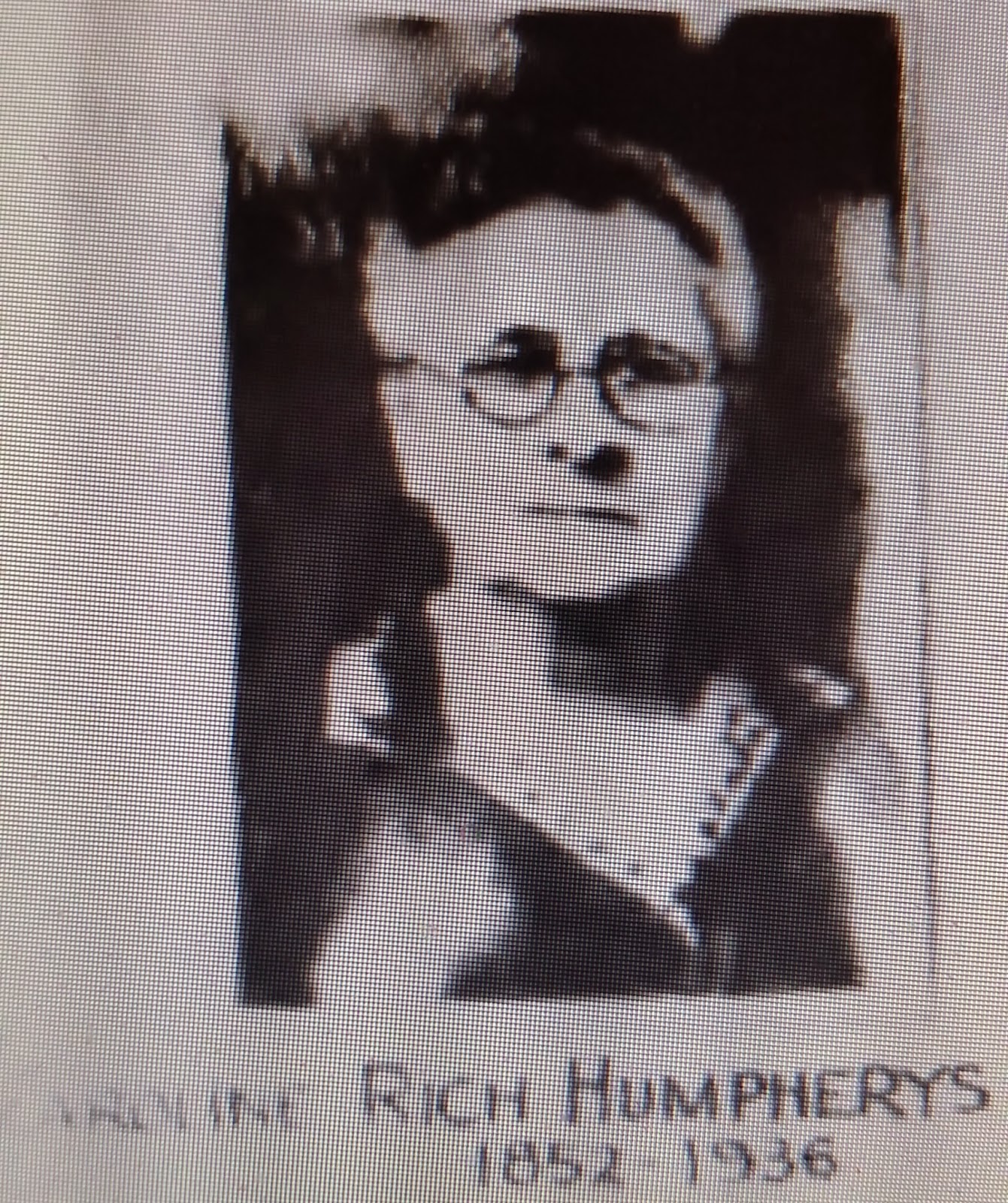 In the fall of 1854, Emeline and her children headed back to the Salt Lake Valley in the company of her husband as he was called to return for a general conference. They traveled in a small group with ten other people. Why did Emeline leave San Bernadino at this time while Mary Ann and Harriet stayed? It is said that she no longer felt her services were required there in San Bernadino and Charles must have agreed. However, Emeline was happy to be back and living now in Centerville, Utah. Over the course of the next ten years she would give birth to three more sons, Landon Jedediah who was born in March of 1858, Samuel Joseph who was born in May 1860 and Heber Charles Chase who was born in August of 1863. On the day that Samuel was born, Charles left for his mission to Europe and it would be two years before he ever met Samuel. 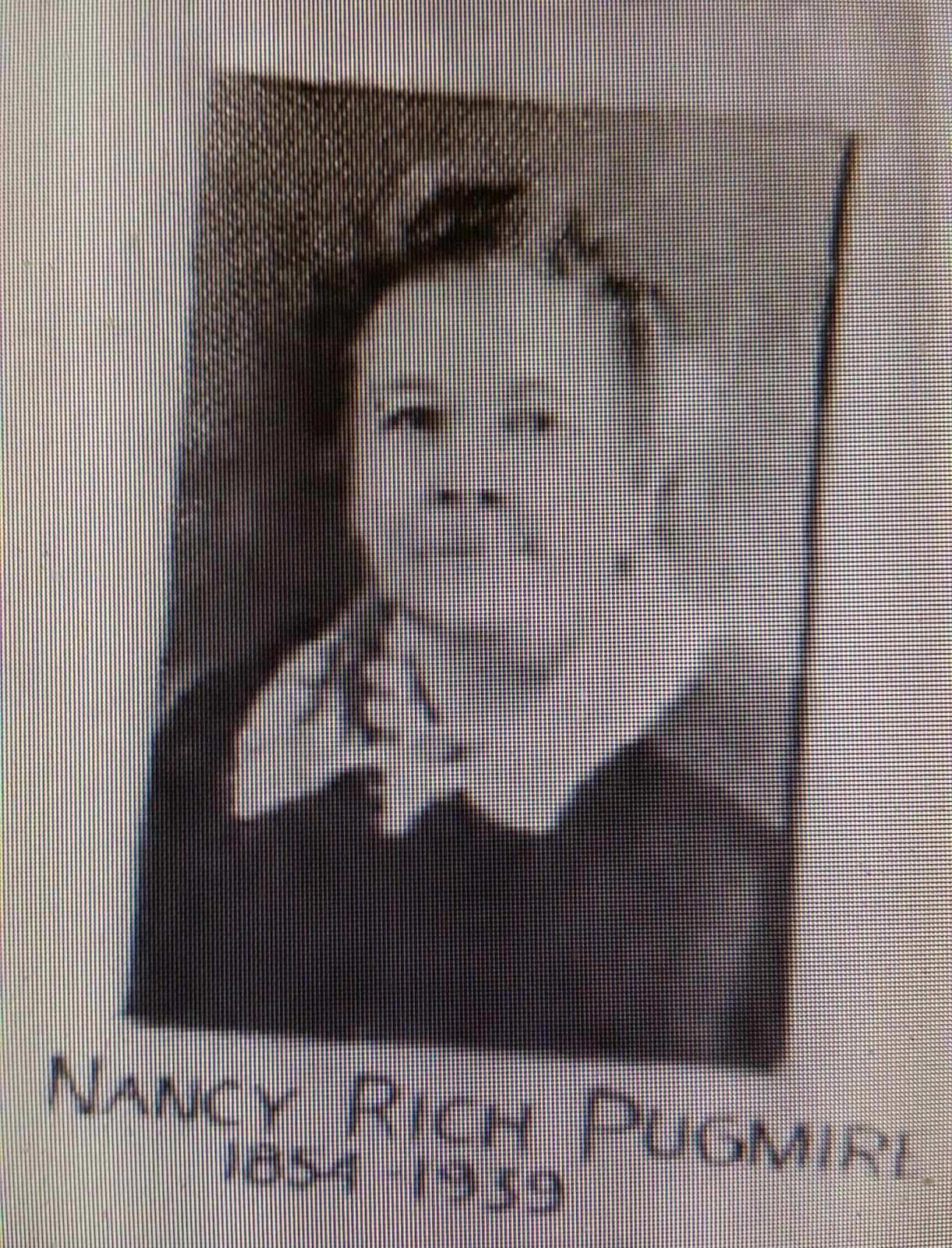 With Charles on his mission to Europe his families were left with little means to support themselves. Like Sarah D., Eliza, Mary Ann, and Sarah Jane, Emeline supported her family with her skills as a seamstress making not only her own clothes but her daughters clothes as well. She was always learning some new skill for her needlework. She learned needle skills from the best of her fellow pioneering women and from Native American women she learned the art of sewing buckskin gloves, a skill she shared with other women in her community.

By June of 1864, the Rich family were moving from Utah, north to the area Bear Lake, Idaho where Charles was once again called upon for a mission to start yet another settlement. At this point, Emeline Grover Rich was thirty-three years old and had six children. The last two children of Charles and Emeline Rich were born in Bear Lake, Idaho, Joel Hezekiah and George Quayle, in March of 1865 and George in March of 1869, respectively.

Those first several winters in Idaho were as difficult as the other journey's that Emeline had been through thus far. Their home had three rooms with only a fireplace in the front room, the floors were made of dirt while the windows were covered in muslin until glass could be installed. The roof of their home was made from willows, straw and then covered with a heavy layering of dirt. The winters here would have been very long and severe in Idaho which resulted in the loss of cattle and food that was not prepared properly for storage under such conditions.

Women in these early days of pioneering did not like for male doctors to attend them during childbirth. Doctors were scarce in these early days and matters were not helped when leaders of the Mormon church spoke of their bias against them. For these reasons a midwife system was put in place. Emeline was part of this network of midwives who carried out the role of midwife but also the roles of nurse, physician and pharmacist. In these roles her services were in high demand and while she treated illnesses such as pneumonia, diptheria, typhoid and scarlet fever, small pox and cholera she also set broken bones and on ocassion extracted bad teeth but it was her duties as midwife that made up the majority of her practice. 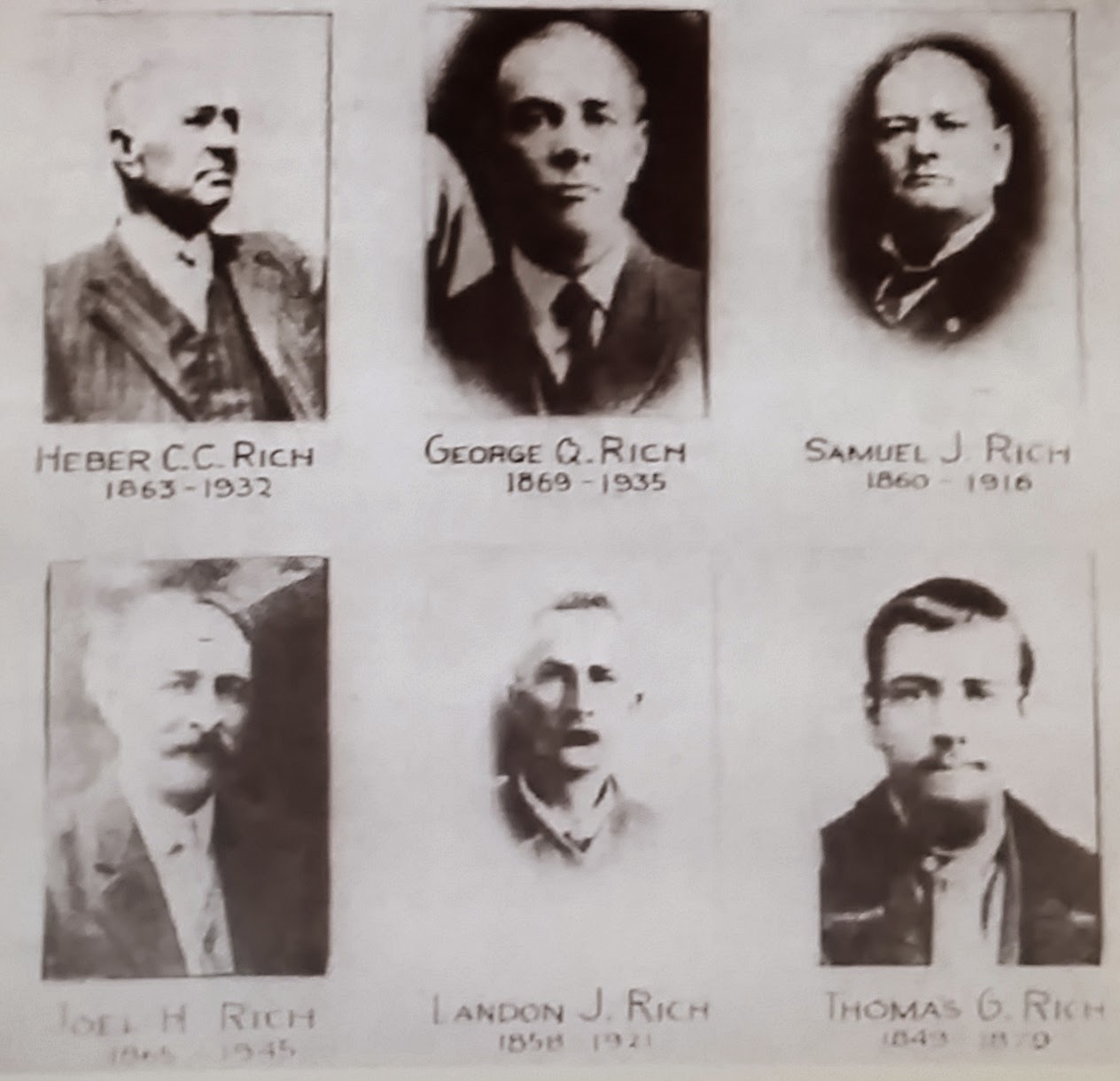 Charles and Emeline's daughter Nancy Emeline married Vincent McKay Pugmire in 1873 and Caroline married Hyrum Thomas Humphreys in 1874. Their eldest son, Thomas Grover was killed accidently in July 1878 and in 1880, Charles suffered a stroke. In June of 1889, Eliza Ann Graves Rich, second wife of Charles passed away. As the fall of 1881 began, Emeline decided that she would return to Provo, Utah with her five remaining children, Landon, Samuel, Heber, Joel and George. She rented a large house, took in boarders, continued her work as a nurse and would accompany doctors on house calls. She also enrolled the boys at Brigham Young Academy (now known as Brigham Young University). Emeline and the boys returned to Provo again in the fall of 1882 so that they could continued with their education.

At some point Emeline enrolled at The Medical College of Utah, in Morgan, Utah. The college was founded in January of 1880 by Dr. Frederick S. Kohler and after two years was forced to close its doors. The fee for students was $80.00 per term (what a baragin!) and students were taught the latest medical techniques. In 1882 the college announced six graduates, one of whom was listed as Mrs. E. Rich of Idaho. Of the four graduates there is only information on two of them, the first being Benjamin Rush Kohler of Pennsylvania and son of the dean, Dr. F. S. Kohler. Emeline Grover Rich by all accounts a brillant student who had been a practicing midwife for many years prior to attending the medical college. Upon graduation she received her diploma and was listed as a member of the faculty specializing in obstetrics, unfortunately she never never had the opportunity to teach.

In February of 1886, Emeline's father Thomas Grover passed away in Centerville, Utah. After his death, she felt a calling to do Temple work in honor of her family who had died. As the fall of 1890 began, Emeline put her house in order and locked it up, made arrangements for the care of livestock and went to Logan, Utah. She lived with her sons, George and Heber while she pursued her Temple work. The records indicate she did work for her mother, whom she lost at such a tender age, and is credited with obtaining a rare, valuable book on her maternal line of Spauldings. Emeline continued her Temple work until about 1898 at which time she returned to her home in Idaho. 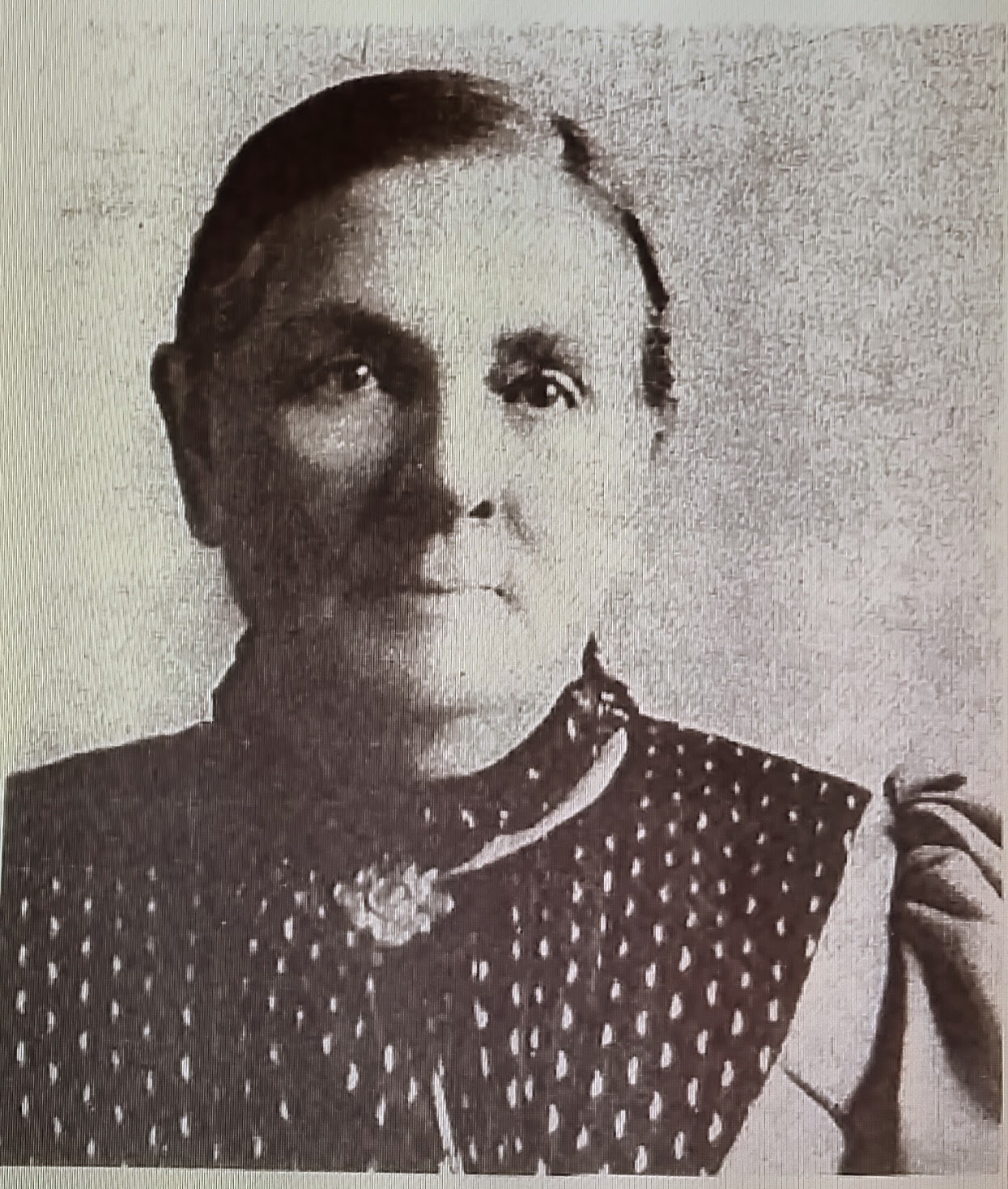 Emeline Grove Rich spent her remaining years practicing medicine, taking care of her home and being active in her community. She was very proud of her children and their accomplishments in life. Emeline learned at an early age that life could be hard and she overcame those hardships to be a woman with grit and determination, self-confident, and a source of strength and hope to her family and her community. Emeline passed away at home on May 4th, 1917 in Paris, Idaho.

Email ThisBlogThis!Share to TwitterShare to FacebookShare to Pinterest
Labels: 2015, 52 Ancestors in 52 Weeks Challenge: 2015 Edition, March 2015, My Mormon Pioneers, My Pioneers