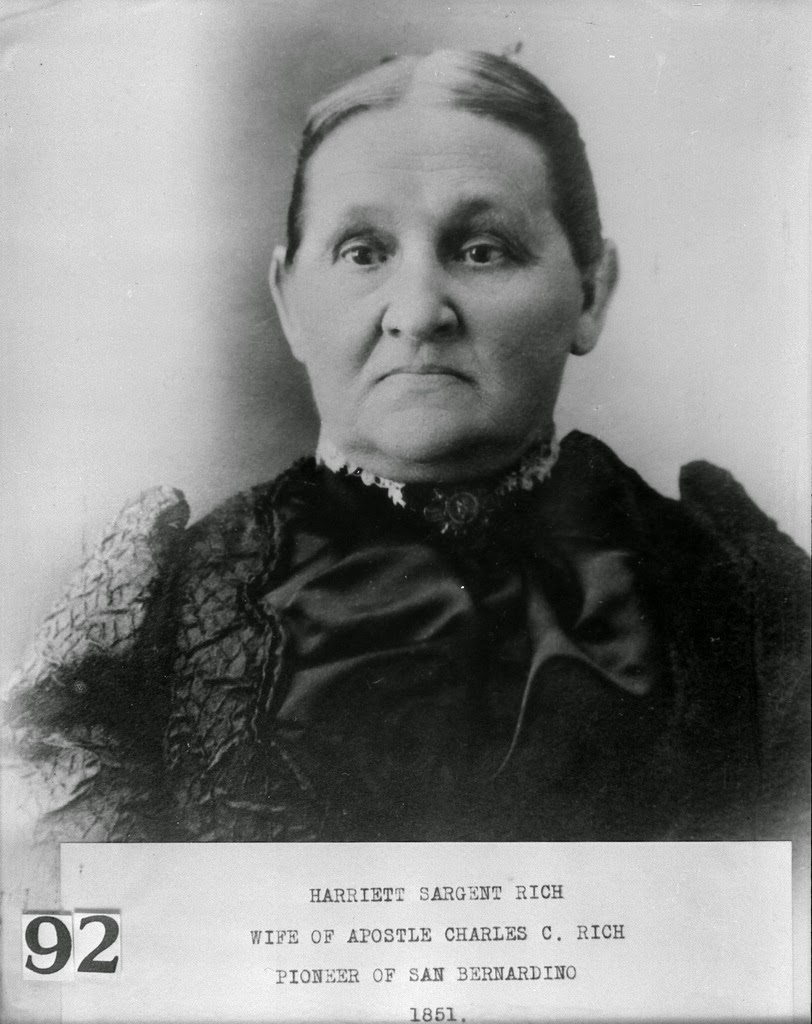 Harriet Sargent was chosen to be the sixth and final wife of Charles Coulson Rich. A decision made by Charles and his first wife Sarah DeArmon Pea Rich.

Harriet was born on October 23rd, 1832 in Fountain County, Indiana to Abel Morgan Sargent, Jr and his wife Sarah Edwards. When she was nearly two, her father moved to Ohio where the Church of Jesus Christ and the Latter Day Saints began. From there he followed the church from county to county, state to state until finally the Mormon community was chased out of Missouri by a violent and angry mob of neighbors.

Like Charles's other wives, Harriet's family was one of the early families practically from the beginning of the Mormon church. As Harriet's family fled from Missouri, her mother Sarah became very ill and possibly injured from a fall and as a result her father took his wife to her family in Indiana. Sarah was pregnant with her 10th child and was expecting to be "confined" soon however, she began her confinement early. Harriet was seven years old when her mother and baby brother died in March of 1839.

After the death of her mother, Harriet's father stayed in Indiana through the summer but decided he would move his family to Nauvoo, Illinois, now the home of the Mormons who had fled Missouri. Unfortunately, his father in law, David Edwards was not pleased by the decision as he blamed the Mormon community for his daughter's death and wanted to keep his grandchildren safe with him. Abel gathered his family together and went to the home of friend to hide but Mr. Edwards, who was an officer of the law found them and told Abel that he would follow and bring the children back to Indiana.

Abel built a raft or skiff and with the aid of his brother, he, Harriet and her sisters Martha Jane and Caroline escaped from the home of his father in law, David Edwards. They traveled for nearly 200 miles before they felt safe enough to land their raft/skiff and transfer to a steamboat which carried them another 200 miles to Randolph County, Illinois. Due to his age, the youngest boy, Thomas and his sister Drucilla having a "swelling of her leg", Abel left them in the care of their grandfather. Upon arriving in Randolph County, Illinois, all of the children became ill and they remained so all winter. Since he was an educated man, Abel remained in Randolph County for four years and taught school there until the family finally moved to Nauvoo.

At some point, Abel found homes for his children (for what reason I do not know) and Harriet was placed in the home of Charles and Sarah D. Rich, caring for their children so that Sarah could do work at the Temple. Then in 1846, Harriet's father volunteered to a soldier in the Mormon Battalion. Upon his return, he stole his son Thomas away from the home of David Edwards and they began the move westward to Utah. Abel and Thomas joined a company heading for Utah. This company was stricken with Cholera during this time. Both Abel and Thomas were stricken with Cholera and died as a result.

After living in the home of Charles and Sarah D. Rich for two years Charles, approached Harriet to ask her about the idea of plural marriages. Several months later he again approached Harriet about plural marriages and explained that two of his brethren were interested in marrying her. They approached Charles for two reasons (1) she was a member of his household and (2) he was the high ranking official during this time in Mount Pisgah, Iowa. The Rich household then moved to Winter Quarters, Nebraska and Charles again approached Harriet about plural marriages but this time he was asking for himself. Harriet then spoke with Sarah D. and with her guidance Harriet accepted the proposal and became the sixth and final wife of Charles Coulson Rich.

As the family made arrangements in Nebraska for the trip to Utah, Charles and Harriet were married on March 28th, 1847. Harriet helped to drive one of the wagons, the one carrying her mother in law, Nancy O'Neal Rich who had been ill through out the journey west. Mrs. Rich died the day after arriving in the Salt Lake Valley.

In the spring of 1849, Harriet gave birth to her first child, Franklin David Rich. Then in 1851, along with Mary Ann Phelps Rich and Emeline Grover Rich they went with Charles to begin the settlement of San Bernadino, California. Harriet's next three children, Adelberg Coulson, Harriet Tunis and Abel George Rich were all born in San Bernadino. In the spring of 1857, everyone in the colony of San Bernadino were ordered to return to Utah by church President Brigham Young. The reason for being ordered to return was due to the fact that Colonel Albert Sidney Johnson was marching on Salt Lake City and what was going to known as The Utah War. On the way back to Utah, little Harriet Tunis died of a convulsion and was interred upon arriving back in Utah. 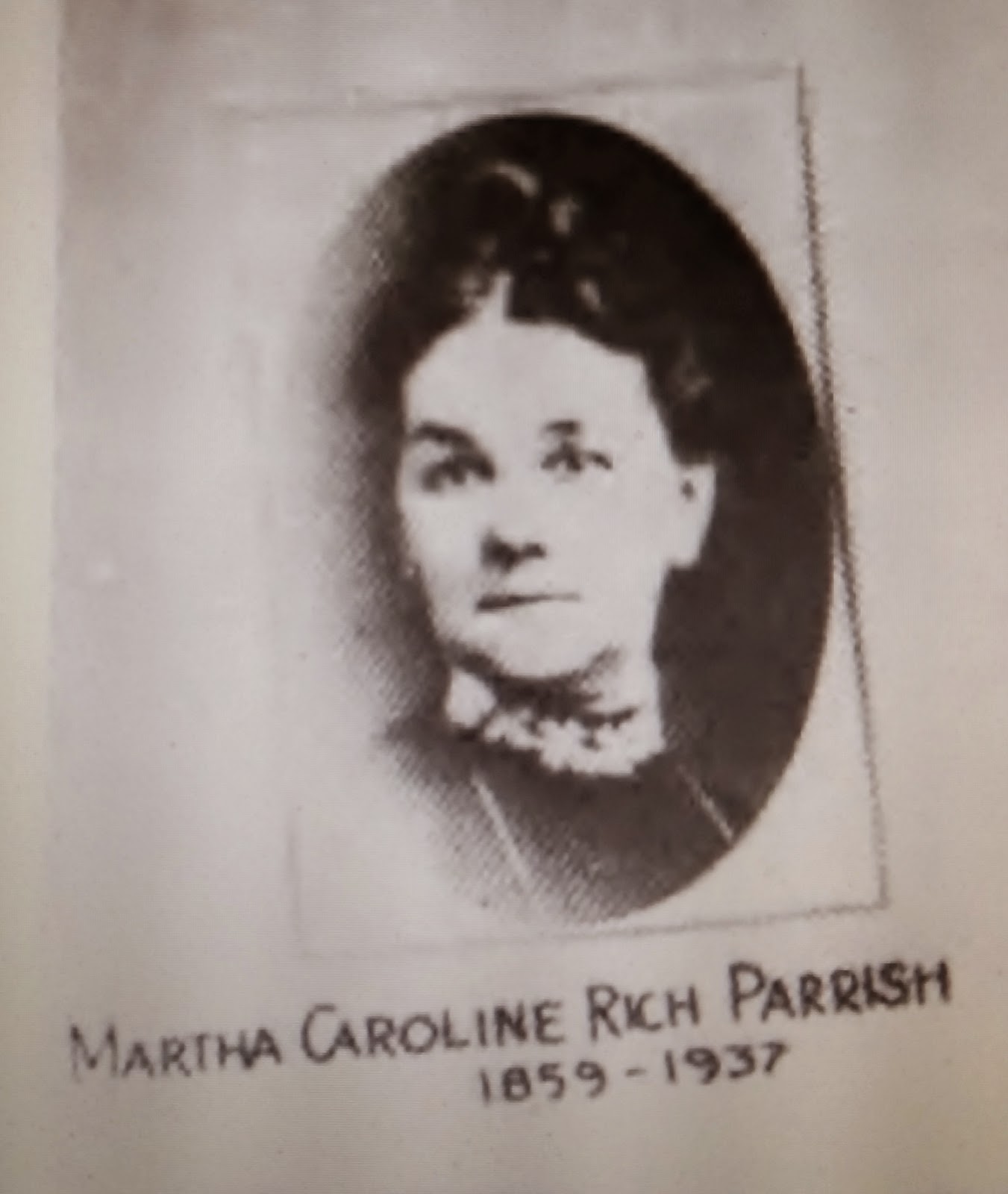 Once the war was over, Harriet and her children settled in Centerville, Utah. It was here that the next two children, Caroline "Caddie" and Harley Thomas Rich were born. When they first settled in Centerville their crops were meager, then Charles was called on to do a Mission in Europe. It was during this time that Charles's wives learned about each other, supported each other and their husband and respective families. By the fall of 1863, Charles was called upon to settle another colony, this time in Bear Lake Valley. It was here that Harriet's last four children, Luna Rosetta, Morgan Jesse, Alvin Orlando and Drusilla Sarah were born. 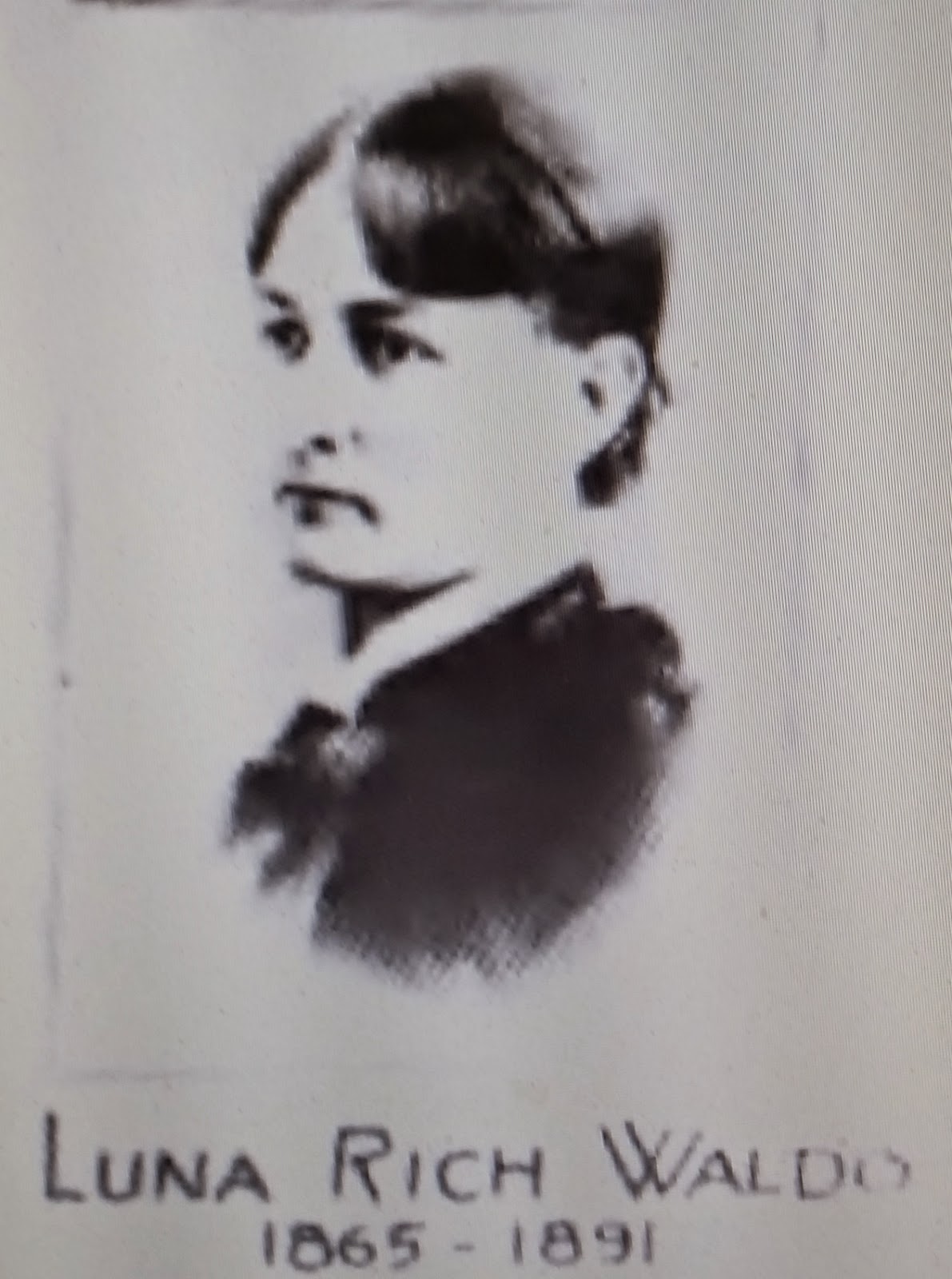 Those first several winters in Idaho were as difficult as any of the other journey's that Harriet had been through thus far. The winters here would have been very long and severe in Idaho which resulted in their grain being frozen which made it damp and moldy. They were still able to perhaps trade and/or hunt wild game and fish. They may have lost some cattle as well as any food that was not properly prepared for storage under such harsh winter conditions.

Harriet loved music, she sang, played the organ and guitar according to her family. Like the other wives she was excellent seamstress, accomplished at dying yarns and using raw materials such as hides to make clothes for herself and her family. With the help of her daughter Caroline "Caddie" she was able to make a rag carpet for her home. As busy as her home life was Harriet still found time to work with the Women's Relief Society and took a special interest in children who had been orphaned as she had been. Also like the other wives, Harriet made many sacrifices to ensure that her children received an education. The older boys Franklin, Adelbert and Abel went to Brigham Young Academy as did many of their their siblings. The youngest son Alvin along with his sisters Caroline, Luna and Drucilla all earned teaching certificates at the University of Deseret in Salt Lake City.

Harriet Sargent Rich died on July 18th, 1915 in Centerville, Utah and was laid to rest beside her husband in Paris, Idaho.

To be a pioneer woman during this time you had to be tough, resourceful, industrious, courageous and have faith that what they were doing was for the greater good of their life, their home and their family. As a family they faced many hardships like rain for days at a time, harsh freezing winters, persecution for your religious beliefs, driving teams of horses and/or oxen, crossing dangerous rivers, deserts and plains, droughts, insects, heat, sickness, birth and death. They dealt with hardships, trials and tribulations of their circumstances at that time.

They saw first hand how the Church of Jesus Christ and the Latter Day Saints forged their way from New York, Ohio, Missouri, Illinois, Iowa and Nebraska to the Salt Lake Valley. They watched as their husband, Charles Coulson Rich was called upon time and again to settle colonies in San Bernadino, California and Bear Lake Valley, Idaho and then accept a mission to Europe for more than two years. Lake Valley, Idaho. They also knew that because of Charles duties both civic and church kept him busy and away from home more often than not, it would fall upon them to raise their children.

These six women, Sarah DeArmon Pea, Eliza Ann Graves, Mary Ann Phelps, Sarah Jane Peck, Emeline Grover and Harriet Sargent were amazing women in their own right.  Collectively, these women gave birth to 51 children and of those, 13 died while in their infancy, early childhood or as teenager. They shared their joys and sorrows and depended on one another for support when Charles was away. They believed in their strength, their faith in God and knowing that all that they had endured would be rewarded in the end. It is my privilege to call these women my ancestors!

Email ThisBlogThis!Share to TwitterShare to FacebookShare to Pinterest
Labels: 2015, 52 Ancestors in 52 Weeks Challenge: 2015 Edition, March 2015, My Mormon Pioneers, My Pioneers