With the blessing of his first wife, Sarah DeArmon Pea Rich, Charles married as his second wife Eliza Ann Graves on January 2nd, 1845 at the Nauvoo Temple in Nauvoo, Illinois.

Eliza is the daughter of Reuben Graves (1786-1858) and Phoebe Palmer (1788-1858) was born in Waterford, Vermont on June 3rd, 1811. She was a sickly child and because of this she was taught to sew suits by hand by her maternal aunt. In 1832, when her family moved to Erie, Pennsylvania. Eliza and her mother, opened a tailor shop and hired a few apprentices.

It was in Erie when Eliza, her mother and her sister, Mary Palmer Graves were introduced to the teachings of the Church of Jesus Christ and the Latter Day Saints and were baptized into the church. As was custom at the time, Eliza and her mother welcomed church missionaries into their home. On one occasion while caring for a sick elder, Eliza met her future husband who had come to call on the elder. Sometime in 1841, Eliza and her family left Erie and traveled to Nauvoo, Illinois.

By all accounts, Eliza was a small woman standing about five feet, two inches tall and weighed about ninety-eight pounds. She was a successful business woman who ran and operated a sewing business in Erie, Pennsylvania and Nauvoo, Illinois. She hired women and girls as apprentices and taught them her craft.

Eliza and Charles were married on January 2nd, 1845 in Nauvoo. They were sealed to each other forever on February 3rd, 1846 at the new Nauvoo Temple. Charles and Eliza had three daughters. The eldest was Mary Bratton Rich (1846-1931), Eliza Ann Rich (1848-1849) and Frances Phoebe Rich (1850-1932). Mary Bratton Rich has the distinction of being the first polygamous child of her father, Charles Coulson Rich. 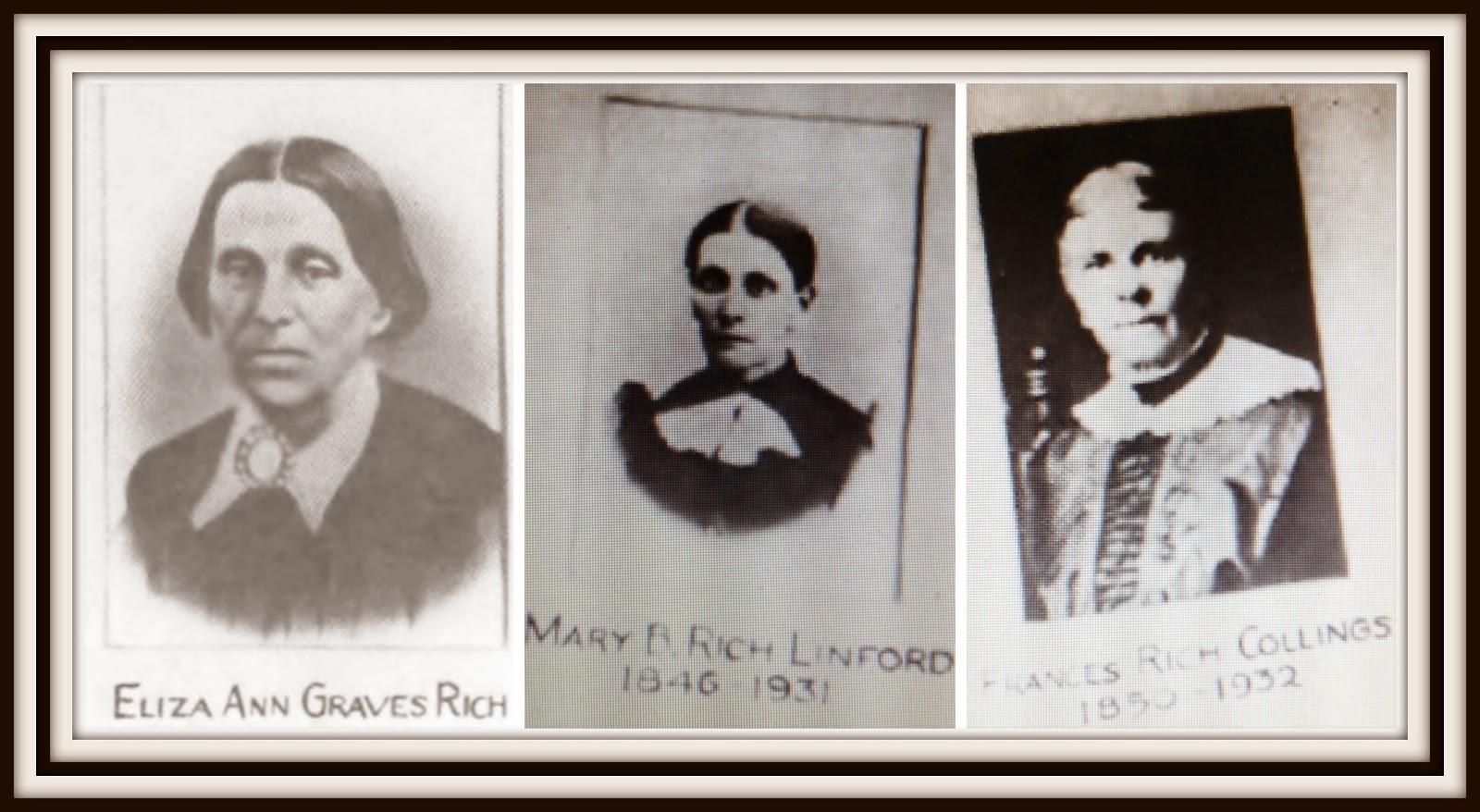 Within days of Charles and his family leaving Nauvoo, Eliza gave birth to their daughter, Mary Bratton. With Eliza's history of being sickly Charles made the decision to leave without Eliza and Mary as the rest of the family headed for Winters Quarters, Nebraska. Eliza understood and asked that Charles bless her, which he did, then left her and the baby in her mother's care.

Once Eliza was strong enough to join Charles and the rest of the family in Nebraska, Mary became very ill. Eliza and her mother endured the violence that was happening in Nauvoo in the summer of 1846. Eliza was taunted and harassed by the citizens of Nauvoo with comments such as Charles had forsaken her and their daughter. Finally on September 3rd, 1846, Eliza, along with her mother and daughter began their journey west and the family reunited.

Email ThisBlogThis!Share to TwitterShare to FacebookShare to Pinterest
Labels: 2015, 52 Ancestors in 52 Weeks Challenge: 2015 Edition, My Mormon Pioneers, My Pioneers, The Rich's, The Williams's