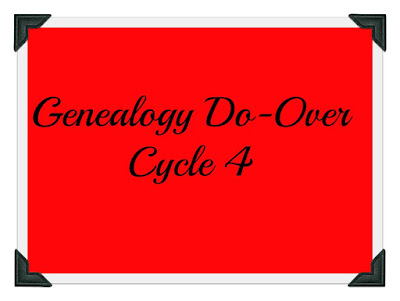 Our assignment for this week is to evaluate evidence and review online education options. Most of what I am have to say can be found in original cycle, week 6 post which you can see here.

When presented with a piece of evidence you will need to ask the following questions. Only after you have gone through the evidence you can then make your analysis of all of the information gathered then and only then do you determine if proof can be established.

There many ways to evaluate the evidence of any ancestor. These are the things I keep in mind when evaluating evidence. If you would like to see the whole list click here.
The following questions should be asked every time you are examining a piece of evidence. 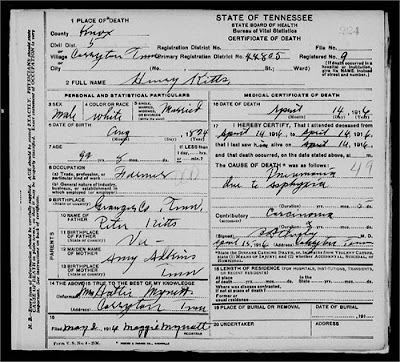 It gives me the place of death: Corryton, Knox, Tennessee & date of death: 14 April 1916. It lists his gender as: male, lists his race as: white and his marital status: married. His name, Henry Kitts. It gives me the month and year he was born: August 1824, place of birth: Grainger County, Tennessee and his occupation is listed as farmer. His cause of death is listed as pneumonia due to asphyxia. There is also a contributory cause listed: carcinoma. His father is listed as Peter Kitts and his mother as Amy Adkins. His daughter Hattie Kitts Mynatt is listed as the informant with her address also being in Corryton.

Anomalies I found in the death certificate from Ancestry:
My Analysis:

I have chosen to use both of the death records I found at Ancestry.com and FamilySearch.com for Henry. I consider this to be a derivative copy of the original document with direct, primary information.

The anomaly I see is that there is no cemetery information listed. However, I know from my children's 2nd great grandaunt, that her great grandfather, Henry Kitts is buried in the Kitts Cemetery in Grainger County, Tennessee.

There is also conflicting information about Henry's mother. Henry's father, Peter Kitts, Jr was married twice. According to Tennesse Marriage to 1825 at Ancestry.com. Peter and Amy were married on May 11, 1812 in Grainger County. Amy died prior to March 1821 as stated in Peter Kitts' War of 1812 pension files because that is when Peter married Elizabeth Nicely. If this is true then Henry's mother should have been listed as his mother. However, what if Henry was born before 1821 and his mother died after his birth?

After carefully researching my options I have decided that (1) I want do the home study course offered by the National Genealogical Society; (2) I will continue with free webinars offered with Legacy Family Tree, Ancestry Academy and at Family Tree University; (3) I want to go through the ProGen Study Group and finally I want to become a certified genealogist. I plan to start the home study program at the end of January 2016 and if all goes according to plan, then perhaps I can start with a ProGen Study group in early 2017. If you have been through either of these education opportunities and have any advice please drop me a line via this post or send me a message via Facebook. Thanks!