Where Are Your Records Hiding ? ~ Katherine Wilkie Orth 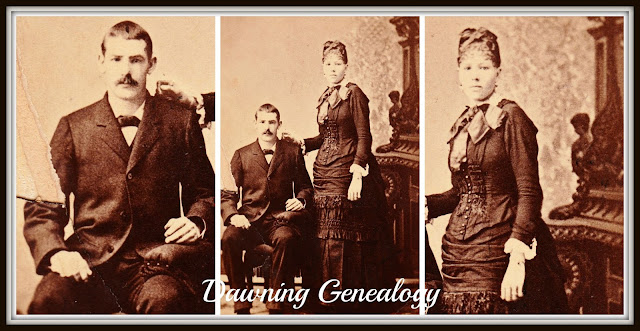 I am about 70% sure that the woman in this picture is my 2nd maternal great grandmother, Katherine "Kate" (Wilke) Orth. I would love to have met the woman who captured Conrad's heart! I know very little about her and my questions are boundless.

She was born November 1st, 1858 and according to the 1920 US Census, she was born in Hannover, Germany, all other records just list her place of birth as Germany. I have had limited success in finding immigration and/or passenger lists for her. However, according to the 1900, 1910 and 1920 US Census she arrived in the United States between 1876-1891. My math skills along with marriage and birth records of her children say she had to have immigrated to the United States between 1878 and 1881 at the very latest.
Katherine married Conrad Orth on Thursday, August 31st, 1882 at St. Paul's Evangelical Church in Louisville, Jefferson, Kentucky. Katherine's last name is spelled Welker on their marriage record.

In the 1900 U.S. Census, Katherine and her family are listed in the 5th Magisterial District of Louisville, Kentucky. The enumerator for this census record made many mistakes and crossed out things only to write above it and it is difficult to make out his handwriting. The 1900 U.S. Census, line 98 lists Katherine as "Kate" and her age is listed as 42, her place of birth is listed as Germany and her parents are listed as being born in Germany as well, she and Conrad have been married for 18 years and she is the mother of three living children, her immigration year is listed as 1877 and her age at that time is listed as 23.

There is also a servant listed with the family by the name of Annie Wilkie who was born in March of 1885 in Ohio. Is she related? Probably too young to be a sister but perhaps a niece or cousin.

In the 1910 U.S. Census, Katherine and her family are listed in Louisville's 3rd Ward and living on Clifton Avenue. She is now age 51, married only once and for 28 years. Still the mother of three living children and still lists her birth place and that of her parents as Germany. Her immigration year is now listed as 1878 and she speaks English.

The 1920, U.S. Census record gives me the most information I have about my 2nd great grandmother, Katherine but I still lacking supporting documents to prove of disprove the information. Katherine and Conrad are now "empty nesters" and living beside their daughter, Pauline, her husband Ray and my grandmother, Myrtle.

According to the census record Katherine and her husband are still living in Louisville's 3rd Ward, Precinct 4 and are living at 114 Jane Street. Katherine is now 61 years old. The 1920 Census asks specific questions regarding citizenship. Katherine is listed as having arrived in the United States in 1871, that she is a naturalized citizen and that her naturalization took place in 1883 (possibly 1888). This census also asked particular questions about your place of birth, the language you speak and whether you can speak English and these questions apply to her parents as well even though I have no names.

Where are Katherine's immigration and naturalization records hiding? I have found a few passenger records that could be her but there are enough differences to make me hesitate in saying yes, this is her! I have looked through passenger lists until I can no longer see straight. I have to wonder if I will find her naturalization records that are now more than 100 years old.