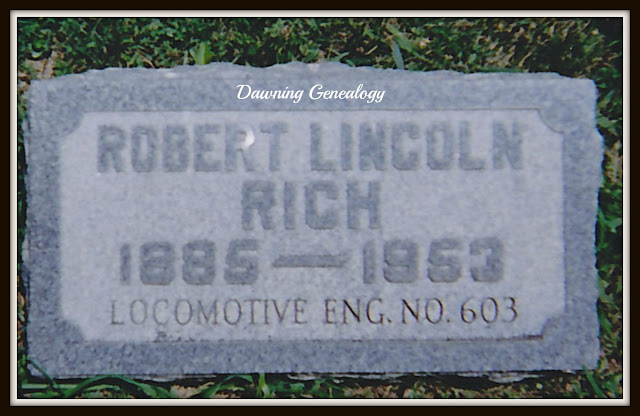 From my trip to Northern Kentucky May 2004

Robert Lincoln "Bob" Rich is my paternal 1st great grandfather and he was a locomotive engineer for Southern Railway. He married my great grandmother, Lillian Bergamot Lanahan in 1905. They had 4 daughters, the eldest Helen Elizabeth born in 1906, their daughter Jean was born in 1908 and died in December 1909, their daughter and my grandmother, Peggy Scott was born in 1911 and their youngest daughter, Sarah Jane was born in 1913. He and my great grandmother were divorced in 1922 in Kenton County, Kentucky. In 1938, Bob married Lida Middleton Fowler and they had one daughter named Jane in 1941. Bob died April 14th, 1953 in Erlanger, Kentucky.