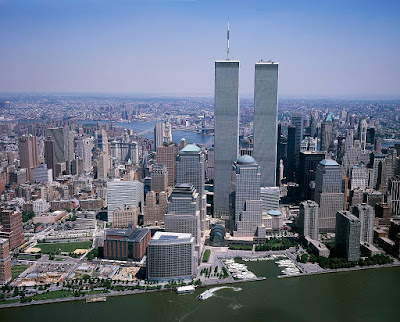 
On September 11th, 2001, I sat in my living room, along with American and those around the world as we watched with horror, as our country fall under attack by terrorists. Terrorists who managed to enter our country, plan and prepare for coordinated attacks from within the United States. These terrorist were eventually linked to an Islamic terrorist group known as al-Qaeda.

There were four jets that were hijacked from Boston, Massachusetts, Newark, New Jersey and Dulles International airport in Washington, DC. Two of these airplanes crashed into the World Trade Center (aka The Twin Towers), the third plane crashed into the Pentagon in Washington D.C and the fourth crashed into a field in Western Pennsylvania.

United Airlines Flight 175, at 9:03A.M., crashed into Tower 2 into the South Tower (aka Tower 2) at floors 75 thru 85, carrying 51 passengers, 9 crew members and approximately killing 900 victims died at Tower 2 and along with 5 of the terrorists. This is the flight that we all saw crash into the tower on television. The flight originated in Boston, Massachusetts. The South Tower was the first to collapse at 9:59 A.M..

American Airlines Flight 77, crashed into the Pentagon at about 9:37 A.M., carrying 55 passengers, 6 crew members and killing 125 military and civilian victims died at the Pentagon along with 5 terrorists. The flight originated at Dulles International Airport in Washington, D.C.

United Airlines Flight 93, crashed into a field in Somerset County, Pennsylvania at about 10:03 A.M., carrying 33 passengers, 7 crew members and 4 terrorists. These passengers contact their friends & families, and learned of the attacks in New York City and Washington D.C. they attempted an attack of there own in their effort to retake the plane. The hijackers then deliberately crashed UA Flight 93 into the field in Somerset County, Pennsylvania. There were no other casualties. The flight originated in Newark, New Jersey.

9/11 - "The television is full of news reports concerning all four crashes, reports of families and friends searching for survivors at the Twin Towers and at the Pentagon. Emergency and rescue personnel along with volunteers are now sifting through ashes and rubble looking for survivors.",  "I am angry and outraged by today's attacks!" " I am glued to the television afraid that if I turn it off there will be another attack."

9/12 - "We as Americans have been dealt a devastating blow but we are far from divided. We are united as country and becoming stronger by the hour.", "Since 1776, America has stood for freedom and she always will!" "Who do these people think that they are?"

9/13 - "America was carved in diversity, made up of all races, religions, and cultures. Without these none of us would be who we are." "...tell them to never to be afraid of who they are and where they came from, tell them to be proud of their history."

9/14 - "We need to remember the police officers, the firefighters, doctors, nurses, constructions workers, engineers, utility workers and all of the volunteers who gave all they had because they are real life, real world heroes." "Tonight there is a candlelight vigil across America. I have made red, white and blue luminaries for our drive way."

9/15 - "I feel so useless right now! Because of medical issues I cannot physically help. All I can do is offer my prayers, my patriotism and stand as a witness to this devastating blow to America." " Here are some of the headlines from the papers and magazines I have collected, "...Rising out of the Ruins..."; U.S. Braces for War"; and "The Day that Shook America".

9/16 - My heart goes out to the family of young woman who was a flight attendant on United Airlines Flight 93 from Greensboro! How awful for this family to lose their wife and mother. I do not know the family personally but all of Greensboro is mourning her loss.

9/17 - "The New York Stock Exchange has reopened. The federal government has dropped the federal interest rate to 3% and President Bush has put billions of dollars back into our economy." Many countries have allied themselves with the U.S. including Russia, China, England, Germany, France, Spain and Pakistan on a limited basis; even Iran and Cuba - I find this surprising all on its own. To paraphrase President Bush, ..."either you are with us or you are against us...". "Our country is mourning but we are united." The news headlines tonight. President Bush says, "...Osama Bin Laden is 'Wanted Dead or Alive...' ". 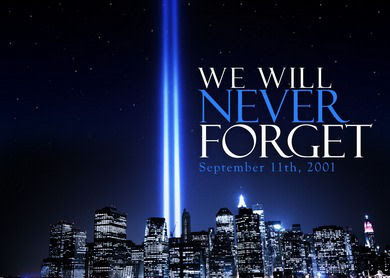 We Will Never Forget Quotes

Email ThisBlogThis!Share to TwitterShare to FacebookShare to Pinterest
Labels: September 2015