In place of that memory I am going to use a post from last year and hopefully, this is a more polished version of my post, The Genealogy of Jesus Christ. 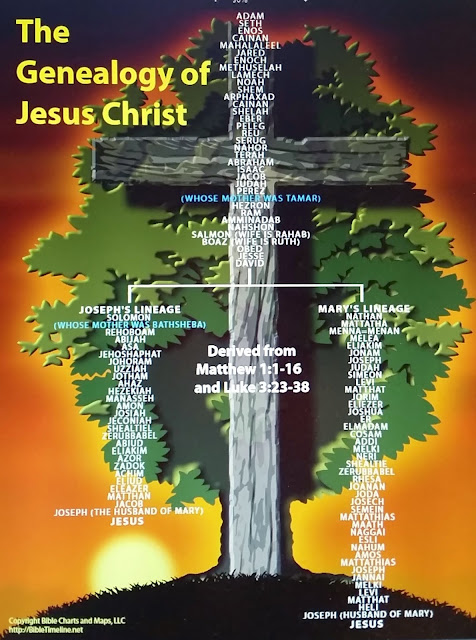 In the New Testament of the Bible you will find that both Matthew (1:1-17) and Luke (3:26-38) have passages with the genealogy of Jesus Christ. In reading both passages I discovered that Luke's passage also included a portion of Matthew's genealogy was included as well. I am not a theologian or scholar of religion and while researching this post I learned of controversies surrounding Luke's passage on the genealogy of Jesus because he uses Mary ancestors where as Matthew uses Joseph's ancestors. I find that Luke's genealogy is confusing as he uses different forms of certain names where the two genealogies are the same. For my purposes I will be using Matthew's genealogy of Jesus as I have found it in my copy of "The One Year Bible, Catholic Edition". I would call this a perpetual bible because there are no years only the month and day with the scriptures for each day.

This is a record of the ancestors of Jesus the Messiah, a descendant of King David and of Abraham:

Josiah was the father of Jehoiachin and his brothers (born at the time of exile to Babylon).

Jacob was the father of Joseph, the husband of Mary. Mary was the mother of Jesus, who is called the Messiah.

When I asked Thomas MacEntee last December if this would be an appropriate subject for the Advent Calendar of Christmas Memories he told me that one of the reasons why the search term "genealogy" spikes around Christmas is because so many people are looking up the the genealogy of Jesus. This was something I didn't know and I thank you Thomas for sharing that little fact with me.

I was able to download the chart above for free the chart is, Genealogy of Jesus. This chart depicts the lineage of Jesus Christ using both Matthew 1:1-17 and Luke 3:23-38.
Sources: