Today's Christmas memory is about the Christmas story.

Here is my paraphrased version of the events that took place surrounding the birth of Jesus beginning with the prophecy of Jesus's birth and ending with the gift of the Magi, based on Matthew 1:18-25 and 2:1-12 and Luke 1:26-38 and 2:1-20 in the New Testament.

The Prophecy of Jesus's Birth

In the town of Nazareth in Galilee lived a young woman by the name of Mary who was engaged to Joseph. During their engagement, Mary was visited by the angel Gabriel. Gabriel told her that she would conceive and bear a son whom you will call Jesus. Mary asked the angel, "How can this be for I am still a virgin?" The angel replied,


"The Holy Spirt will come upon you and the power of the Most High will overshadow you. So the baby born to you will be holy, and he will be called the Son of God." Luke 1:35

Gabriel then tells Mary of her relative Elizabeth, wife of Zechariah is also with child in her old age. Elizabeth was thought to have been barren but now look. Mary replied to the angel, "I am a servant of the Lord and I will accept whatever he wants. May you word to me come to pass."

Joseph was not very sure about any of this, he was just a man and unsure of what to believe. He made the decision to end their engagement quietly. During the night he was visited by an angel of the Lord in a dream. The angel told him, "Joseph go ahead with your marriage to Mary. The child she carries was conceived by the Holy Spirit." When Joseph awoke the next morning he did as the angel instructed him to do. He married Mary and the child was named Jesus.

The Birth of Jesus

And so it came to be during this time that the Roman Emperor, Caesar Augustus decided that a census should be taken through the entire Roman Empire. Everyone was to return their home town. Joseph and Mary left Nazareth in Galilee and made the trek to the city of Bethlehem in Judea so that he may register for the census.

It was during this time that Mary gave birth to Jesus. She wrapped him in swaddling clothes and laid him in the manger for there were no guest rooms available. Just outside of the village, shepherds were watching their flock when an angel of the Lord appeared and they were surrounded by his glory. The angel told them, "Do not be afraid for I bring joyous news! The Savior has been born tonight in the town of Bethlehem! You will find the babe, dressed in swaddling clothes, lying in a manger." Then the angel was joined by the armies of heaven, praising God, Glory be to God in the highest and peace on earth to all men."

When the angels returned to heaven the shepherds decided they wanted to see this babe who was laying in a manger who would be the Savior. They gathered themselves and went in search of Mary and Joseph. They found them with the new born king, Jesus. The shepherds returned their fields tending their flocks and praising God for sending the angels to tell them this glorious news. 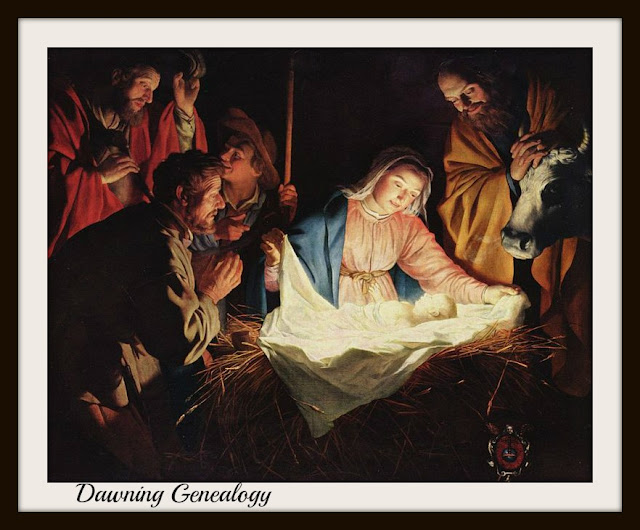 The Adoration of Shepherds by Gerard van Honthorst. Painted 25 December 1622

It was during the reign of King Herod of Judea that Jesus was born. Three maji traveling from the east arrived in Jerusalem asking "Where is the newborn king of the Jews? We have seen his star as it rose in the sky and we have come to worship him." King Herod was very displeased with this news. He called for his priests and scribes and he asked, "Where is this newborn king to be born?". They replied, "In Bethlehem." After meeting with his priests and scribes, he sent a private message to the maji. The message asked the maji to come and see him. King Herod wanted to know when exactly they saw the star they had been following. After being told, the king told the maji, "Go to Bethlehem and search for this child and when you find him please tell me so that I may worship him too."

The maji left King Herod and continued their journey following the star that was guiding them to Bethlehem. They found the star above the place where the child was. They began to worship him and opened their treasured gifts to the child which contained gold, frankincense and myrrh. When it was finally time for the maji to leave, they went home on a different route. They had been warned by God to not go back to King Herod. 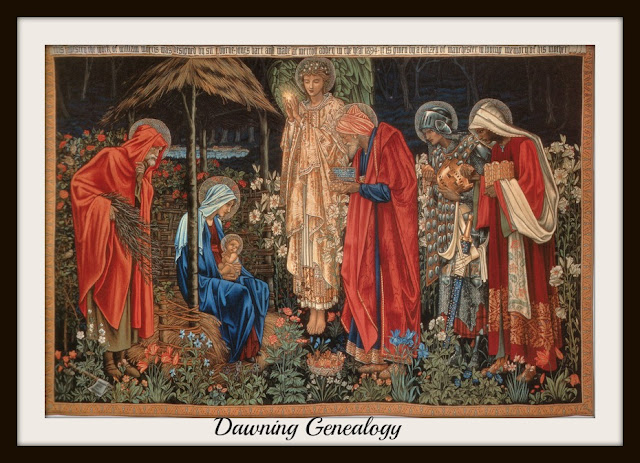 The Adoration of the Magi Tapestry, made in 1894